Deer Rescue
Tired Deer Gets a Helping Hand from Trooper

By ADF&G and Department of Public Safety staff 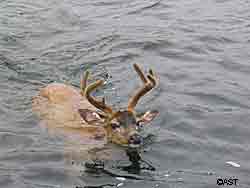 Sitka black-tailed deer are good swimmers, but even a good swimmer has his limits. On July 9, 2004, Alaska State Trooper Jeremy Baum was patrolling the Thorne Arm area south of Ketchikan aboard the 18-foot patrol vessel “Whaler” when he saw a Sitka black-tailed deer buck in the water. As he approached, it was obvious the animal was having a difficult time swimming and keeping his head above the water.

“When he saw me he came swimming right toward me,” Baum said. “He swam over to the back of the boat and tried to climb in. He couldn’t make it, and it was tiring him out even more. He finally just laid his head on the transom. So I grabbed him by the antlers and pulled him in.” 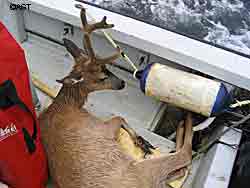 The deer was not able to move his legs, but he could hold his head up.

“He was too tired to stand, he just laid in the boat,” Baum said.

Trooper Baum took the deer to the nearest shore, about a mile away, but when he tried to coax it out of the boat it would not leave. He gave the buck about 20 minutes, then pulled him out of the boat and on to shore.

“I’d help him stand up and he’d fall over,” he said. “I finally got him up on his feet, and he seemed to be doing better. He finally walked into the woods.” 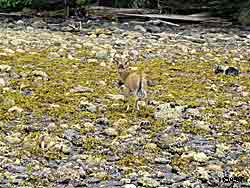 Baum returned to his wildlife enforcement duties, checking on sport anglers fishing the creeks and bays of South Revillagigedo Island.

Thanks to the Department of Public Safety (DPS) for their contributions to this story. The DPS newsletter "DPS Quarterly," can be seen at: http://www.dps.state.ak.us/pio/releases/Resources/The%20Quarterly%20Magazine/