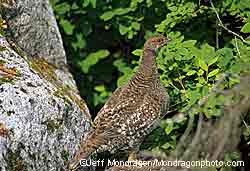 Alaska Fish and Game biologists are happy to answer questions, but sometimes there’s a better way than fielding dozens of phone calls.

“Tom Paragi came up to me and said, ‘Every year I get bombarded with questions about grouse and ptarmigan by small game hunters. Can we get something out for them?’”

The result is “The Grouse and Ptarmigan of Alaska: A guide to their identification, habits and habitat.” This 42-page booklet offers details on willow, rock and white-tailed ptarmigan, and blue, spruce, sharp-tailed and ruffed grouse. The guide is available at no charge through Fish and Game.

“This is for people who really want to know about grouse and ptarmigan,” Taras said. “It’s a natural history book, not a bird guide. It’s really for somebody who wants to learn more about them than they can from a bird (field identification) guide.”

Taras said the guide offers the most updated knowledge, and the latest research and findings about these birds. “It’s got local information, regional information, where to find them and look for them - not only the habitat, but particular areas.”

Robin Dublin, wildlife education coordinator, explained that the grouse and ptarmigan guide is an updated version of a well-loved publication written by state wildlife biologists Bob Weeden and Larry Ellison almost 40 years ago. Dublin wrote in the foreword to the new guide:

“Upland Game Birds of Forest and Tundra” was first printed in 1968 by the Alaska Department of Fish and Game. This book, popular among upland game bird hunters and wildlife watchers alike, was so coveted that in the 1990s rare, tattered and coffee-stained copies were very hard to come by and even harder to borrow from possessive owners. For years, Bill Taylor (wildlife veterinarian, retired) and Nick Steen (wildlife biologist, retired) hoped to breathe new life into this old friend.

In 2004, when ADF&G’s wildlife education program became fully staffed, and with help from the Ruffed Grouse Society, their hope became reality. In an effort to maintain the charm and feel of the original manuscript, we kept most of the language and original artwork, adding new range maps, plant and anatomy illustrations, and updated information.

Wallen has become renowned for his sculpture and artwork. He created a monument honoring World War II aviators that will be installed in Fairbanks in the near future, and has two bronze life-size bear sculptures prominently displayed in Juneau. In the mid 1960s Wallen worked closely with biologist Robert Weeden on several ptarmigan research projects, and he remembers working on the original drawings for the guide.

“Some of those drawings were done up near Mastodon Dome, during Bob Weeden’s study of rock ptarmigan,” Wallen said.

That study northeast of Fairbanks involved looking at nests and nesting birds. A ptarmigan is often reluctant to fly and in response to a potential predator will freeze, depending on its camouflage to hide it. Weeden had trained two black Labrador retrievers to help with the research by locating nesting ptarmigan.

“They were wonderful dogs,” Wallen said. “They just found them, they wouldn’t pick them up. A hen ptarmigan will sit tight on the nest, and one of the dogs, Tarr, he’d just stand over them and he’d start to drool. We might be a quarter-mile away, catching up, and meanwhile that poor hen, her whole back would get a soaking.”

Wallen remembered another incident when Weeden was in Juneau for a day.

“He wanted a live specimen of a blue grouse. He took a landing net, and walked up Perseverance Trail, I think it was, and came back before too long with a bird, a hooter. He was able to call it down and capture it. No gun, nothing. He just had a way of doing it. He really knew his stuff.”

Wallen took field notes to accompany his artwork, noting details about the specific birds he was drawing. The illustrations in the guide include Wallen’s observation, such as this one accompanying the chapter on the Alaska state bird, the willow ptarmigan.

“Spring was just beginning as this male willow ptarmigan watched his world, unafraid, from a thin willow thicket. Still padding across the thawing snowdrifts in his winter snowshoes, he raised his red combs and cackled gutterally, leaving no doubt who controlled this tiny corner of subalpine habitat.”

Wallen’s real-life observations reflect important aspects of bird biology that are detailed in the guide: the birds’ territoriality, the display of red combs, the unusual voice and the birds’ snowshoes.

Weeden worked for the department from 1959 to 1969, then taught wildlife, management and biology at the University of Alaska Fairbanks. He retired in 1990 and moved to Southwestern British Columbia.

“I was hired by Jim Brooks, the first commissioner after statehood, to be in charge of upland game birds, waterfowl and furbearers,” Weeden said. “I decided we should begin a public outreach involving general education, and had the idea for the brochure. It really came together when I met Skip and realized he could do the drawings.”

Copies of “The Grouse and Ptarmigan of Alaska: A guide to their identification, habits and habitat” are available at some Fish and Game offices, and through the wildlife education program. To request a copy, e-mail Mike Taras with a complete mailing address at mike.taras@alaska.gov