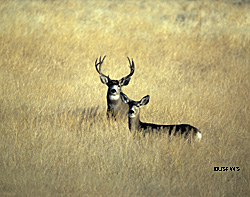 Deer, moose, caribou and elk grow antlers in the spring and summer and shed them in the winter. Photo USFWS/Tupper Blake

Many deer hunters and wildlife watchers eagerly search the woods in winter and early spring for sheds, the discarded antler racks from buck deer. People sometimes call these horns, but these are antlers, not horns.

Antlers are temporary projections of bone grown and shed each year. Though the bone looks quite solid, it has a honeycombed structure at the microscopic level. Antlers arise from a pair of pedicels, knobby, skin-covered nubs atop the buck's skull. The pedicles are the “buttons” between the ears of a buck fawn. Pedicels are permanent structures and are the point at which the antlers break off and regenerate. Antlers are found only on cervids, such as deer, elk, moose and caribou. They are generally found only on males, but both male and female caribou have antlers. Once in a great while a female moose or white-tailed deer will sprout antlers, due to a hormone imbalance.

Antlers are the fastest growing tissue in any mammal, and can grow an inch a day. A big bull moose can grow an 80-pound rack in a summer, adding a pound of bone a day. Genetics has an influence on antler growth and size, but nutrition is by far the most important factor, and bucks in high quality habitats grow much larger antlers. Deer antlers weigh, on average, between 3 to 9 pounds. By the time the antlers are in top condition in the fall, the bone tissue has stopped growing and is dead.

True horns are found on bovids such as mountain goats, bighorn sheep, bison and pronghorn antelope. Horns are permanent, continually growing projections of living bone protruding from the skull. They are sheathed in a layer of keratin, a tough, dense substance like fingernails or horse hooves. Except for the pronghorn antelope, horns are usually unbranched and remain on the animal throughout its life. Horns are usually found on both males and females.

The annual cycle of antler growth is controlled by the relative length of daylight versus darkness as it changes with the seasons. In a deer, the brain’s pineal gland reacts to the changing length of daylight by signaling the pituitary gland to release testosterone. As the daylight increases in mid-March and April, the production of testosterone increases in bucks. This hormone triggers changes in male reproductive features; the antlers begin growing from the pedicel and neck muscles increase in bulk to help the buck support the added weight of the antlers.

During early spring and summer, deer feed heavily to replenish the fat reserves they depleted during winter. Does need energy to make milk to nurse their newborn fawns. Bucks use some of this new energy to grow antlers, a process that requires a substantial amount of protein and minerals. Deer rely on plants for these minerals, and they select plants offering the highest mineral concentrations.

When a young buck reaches 10 months of age, its first set of antlers begins to grow. Yearling bucks usually carry spikes. These are antlers with a single bone having no branching pattern. These first year antlers are small because the young buck’s body is still growing rapidly and its nutrition is directed more toward muscle and skeletal growth than to antler growth.

Antlers in the early stage of growth are covered with a fuzzy skin called velvet, which contains a tremendous concentration of nerves and a vigorous supply of blood. The velvet nourishes the growing antler for about five months.

During development, antlers are delicate and extremely sensitive to the touch. Deer in velvet try to avoid any contact with their antlers. Velvet antlers are quite prone to damage or breakage. If an antler is injured during this period of rapid growth, it may become misshapen for the remainder of the year. Some unusual antler racks are due to genetics, but most are the result of an injury to the growing antler itself or even to another bone in the deer's body. If a buck injures its leg, the antler on the opposite side of its body is affected. 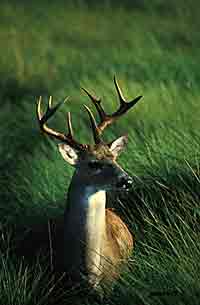 By August or early September antlers are fully-grown. They have stopped growing and the bone begins to die. The velvet "skin" dries up and falls off. Some people mistakenly believe that bucks rub their antlers on saplings and small trees to remove this dried velvet because it "itches." However, some bucks spend days with dried velvet draped across their antlers, heads and eyes. Also, the dried velvet contains no living nerve tissue so it cannot "itch."

The best explanation for bucks rubbing their antlers on trees is that they are sparring with the limbs and trunks to strengthen their neck muscles in preparation for future duels with other bucks during the upcoming rut. Rubbing helps communicate to others in the area. A buck typically rubs a tree sapling with its face as well as its antlers. This action spreads scent from the lacrimal gland (similar to our tear ducts) to the tree limb. Bucks spread this scent around by rubbing the limb with their antlers. The scent advertises the buck's presence to other males and females.

As rubbing continues into the rut (from late October through November), the antlers acquire a polished look and the bucks become very aggressive toward each other. This is the time of year when the distinctive sounds of sparring bucks may be heard in the woods. These rigorous shoving matches function as a mechanism to decide which buck gains access to territory and females for breeding. Many confrontations consist of simple "display" matches where bucks position themselves and their antlers in order to impress their rivals and get them to back down without physical contact.

Sometimes, however, bucks actually battle fiercely and may receive serious wounds. Sometimes they may kill their opponent. Sometimes the tines of the antlers lock together during combat. Because the bucks do not have as much strength in their backward yanks as they have in their forward thrusts, they sometimes cannot unlock themselves and so subsequently die a slow death. Sometimes, the stronger buck will drag the weaker buck around for days, but it, too, will eventually die. These duels help assure the natural selection of the strongest, dominant bucks who will be able to pass along superior genes to subsequent generations.

In addition to sparring with their opponents, bucks also use their antlers to dig in early snows in search of food.

After the rut, day length decreases and so does the testosterone level in the blood stream. The connection between the antlers and the skull's pedicels weakens and the bucks eventually shed their heavy racks. This process takes only two to three weeks to complete. Depending on the severity of the winter, white-tailed deer bucks may drop their antlers beginning in late December, but more typically they shed their antlers in January or February, and sometimes even in early to mid-March. Deer on poor quality habitat lose their antlers sooner than deer on good quality habitat.

Mary Kay Salwey, Ph.D., is a State Wildlife Education Specialist with the Wisconsin Department of Natural Resources. This article is reprinted with permission.