“Fishman and the Bear”
Bring Salmon to Alaska Schools 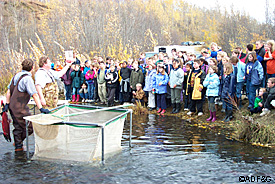 Aquatic educators Fritz Kraus and Craig Baer bring students to the salmon, and salmon into the classrooms.

This winter, salmon eggs will be incubating in streams – and classrooms – throughout Southcentral Alaska.

Salmon fry are developing in cold-water aquariums under the watchful eyes of students, thanks to Fritz Kraus. About 100 classrooms are involved in the aquatic education program, sponsored by the Alaska Department of Fish and Game. Known as “Fishman” to thousands of Alaska kids, Kraus has spent 14 years bringing salmon into schools, and bringing students outdoors to salmon streams. His work has made lasting impressions on young Alaskans.

“When a kid comes up that you taught in first grade - and now he's a senior - and says he remembers when you came in and taught him, it tells you that you got something into his head,” Kraus said. “Hands-on classes are the ones you remember.”

Kraus started the program in Anchorage in the early 1990s, and it has since grown to include Soldotna, Kodiak, Homer and the Prince William Sound and Bristol Bay areas. Craig Baer, known as “the Bear,” a longtime fisheries technician in Palmer, brought the program to Palmer area schools.

Baer said teaching kids about salmon is helped by the fact that almost every Alaskan has some tie to the resource. “They can easily relate to salmon, so they benefit from learning more about these important fish,” he said.

Although there are a number of components to the aquatic education program, Kraus said the cornerstone is incubation. Students watch fisheries technicians take the eggs in the field and fertilize them. Refrigeration units, manufactured in Alaska, are installed in 29-gallon glass aquariums, with under-gravel filter plates and aerators that circulate and oxygenate the water. 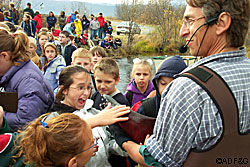 In Anchorage, Kasilof, Palmer and Kodiak, the release of the salmon fry is an event billed as a “Salmon Celebration.”

“The eggs are in a redd (nest) in the tank – we try to simulate that – and water flows through and kids watch newly fertilized eggs,” Kraus said. “Then in late fall they see the eyeballs develop right there, we call those eyed eggs, and in mid to late winter the eggs hatch. Then they’re free-moving alevin. Those fish are not good swimmers and they have a yolk sac. They burrow into the gravel so we cluster little piles of rock so they have place to hide, and they absorb the yolk sac for rest of winter. Ideally in nature that coincides with spring break up, an optimum time for food availability.”

The eggs in the aquariums develop at a rate similar to that in the local streams. In most cases the fry are taken to an area landlocked lake in May, where they can be released and not affect the wild salmon populations. In some cases hatchery-raised rainbow trout are released at the same time, and students get to see the fish stocking process.

Teachers are provided a curriculum that is correlated with state educational standards.
During winter Kraus delivers watershed presentations in the classroom and leads ice fishing field trips for students. For many students, it is their first fishing trip and Kraus has helped many kids catch their first fish. Kraus also leads hands-on lab sessions helping student to dissect salmon and learn how human anatomy compares to fish anatomy. 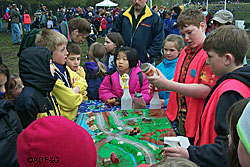 A Salmon Celebration offers a variety of hands-on activities including salmon-relating arts and crafts, games that teach about salmon life cycle and habitat, fish tanks with live fish and touch tanks with aquatic insects and creatures.

“A cannery on the Kenai donates hundreds of fish for us to use in classrooms, glazed and frozen whole pinks,” Kraus said. “They’re beautiful fish. I thaw them and bring them in, we get about one fish for every four kids. I walk them through the dissection, the anatomy and how all the parts work.”

In Anchorage, Kasilof, Palmer and Kodiak, the release of the salmon fry is an event billed as a “Salmon Celebration.” About 2,000 students attended the event in Anchorage this spring. The Salmon Celebration is more than releasing the fry. Booths staffed by students and community volunteers offer a variety of hands-on activities including salmon-relating arts and crafts, games that teach about salmon life cycle and habitat, fish tanks with live fish, touch tanks with aquatic insects and creatures, and fly casting and spin casting stations so students can handle a fishing rod.

Hands-on wildlife-related activities are included as well, and students can see skulls and fur from bears, wolves and beaver and learn about animal tracks.

“The goal is to insure the resource is around for a long time, so their kids can enjoy it,” Kraus said. “Alaska still has healthy wild stocks of salmon, and another goal of the program is to help the public understand how to take care of our salmon resources, so that we don’t end up trying to restore lost or depleted runs as is the case in much of the Pacific Northwest.”