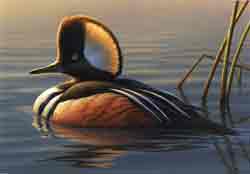 This merganser design, which took third place in the federal duck stamp contest, is the new Alaska duck stamp.

The Alaska duck stamp design for this year is from an acrylic painting by Don Moore of Monona, Wisconsin. Moore has won the Wisconsin waterfowl stamp competition three times and this merganser design took third place in the federal duck stamp contest.

The Hooded Merganser is the smallest of the three species of mergansers in North America. The common merganser and the red-breasted merganser are more abundant in Alaska than the hooded. On the West Coast, the range of the hooded merganser extends up to southeast Alaska. Their wintering areas extend to southern California.

The male, shown on the 2005 stamp, is distinguished by the large flashy white crest on its head and narrow serrated black bill. The males will raise and lower the crest in display. Females are generally plain with muted dark gray and brownish plumage, but they also have a crest. Like some other sea duck species, these birds nest in tree cavities or man-made boxes near freshwater lakes. These birds are excellent divers, and swim underwater using their wings and their feet. They feed on fish, insects, small animals, crustaceans and plants.