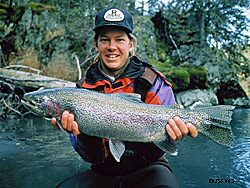 Brad Bentner holds a nice rainbow. A few supplies and a little care mean a nice trout like this can become a treasured keepsake. Mounts can also be prepared for fish that are released alive. Photo courtesy USFWS

Field care for fresh and salt water fish is similar. Most freshwater anglers who are freshwater fishing often have the room, storage facilities/containers to facilitate the temporary preservation of the trophy. However, I have found in my years of being involved in the taxidermy/ wildlife artistry business that most anglers are seldom prepared to assist in the process of field care.

Here’s what usually happens. First, it’s sort of a scramble to initially dispatch the fish by whatever means are handy. This is most often handled by your most favorite fishin’ pard, not you (you’re holding the rod, remember?) This activity is assisted by instructions to "whack 'em," "hit 'em in the head now!" or in the case of saltwater trophies, "shoot that *&*#@$# of a gun."

We next toss 'em in the cooler along with the Bud Light as they seem compatible, or in the best of worst scenarios: "Aw, just toss 'em over there by the coolers, they’re still hittin’." Fellas, does this ring a bell?

Alas, what all to often happens is that we mouth the usual field-care maxim, "Hoss, don't worry about 'em. My taxidermist can fix anything." This pure gold advice is, of course, passed along from father to son. It may be genetic. I, of course, usually hope I'm on vacation when these fish come to town.

On a serious note, poorly cared for fish trophies, in my opinion, are the most unforgiving, difficult-to-repair, or completely un-mountable sort of taxidermy work there is. If you want to do the job right, here is what you need:

FIELD CARE: Catch and release.
This most often requires assistance. Take good pictures immediately onsite, at the water’s edge. Measure the fish from nose to fork of tail. This is measurement A. Then measure the fish directly in front of the dorsal fin, located in center of the back, with the exception of pike, burbot, and other fishes whose dorsal fins are located further back. These fish should be measured around the center of the largest part of girth. This is measurement B. Carefully release the fish, assisting its recovery if necessary. Today, there are literally thousands of reproduction blanks on the market, so that the choice is yours.

FIELD CARE: Skin mount trophies
Dispatch the fish quickly, keeping in mind the following: bag limits, impounding regulations and keeping the fish in good condition with a lack of refrigeration. In Alaska, continuing to fish while in possession of a trophy fish, with the bag limit of one (e.g. a king salmon) is illegal.

For killing the fish, a sharp slender instrument inserted behind the eye into the brain is usually sufficient. Immediately take a picture of the fish using the dark cloth as a background. Do not remove any slime, or as little as possible. Then generously wrap the fish in the plastic freezer wrap. Use plenty. Then place the fish in a plastic garbage bag, rolling the bag up around the fish. Then tape off the bag, finally placing it in cold storage. Quickly freezing the fish, when available, is the best. Take care when placing your fish in the ice chest. Drink cans and other objects will mark the fish permanently.

Take the fish to your taxidermist as soon as possible. Most taxidermists prefer to receive your fish as quickly as possible so as to remedy any possible mistakes immediately.
There is one other situation that sportsmen sometimes find themselves in, and that is where the trophy fish is record class. To officially weigh the fish, the fish will have to be examined to insure that it didn't ingest 3 lbs. of #2 bb shot on its way to the surface. (I swear, it’s happened to me grayling fishing. Darned ole grayling took on more'n 4.5 lbs. of lead shot, all 16 inches of him. Couldn't understand why they weighed him.) Anyway, you will have to make an incision on one side or the other --not in the belly-- as we never gut our trophy fish. I suppose I forgot to mention this small detail. This will allow for examination by the weight official if required.

Well sportsfolks, that’s it. Good luck/good fishin, and see ya on the creek.

Charles Livingston is a taxidermist and wildlife artist with 30 years experience. Charlie owns Alaska Wilderness Arts and Taxidermy located outside of Fairbanks, Alaska, in North Pole. His shop is located at 2944B Richardson Hwy, North Pole, AK 99705. Shop phone / FAX is (907) 488-9307.