Tracking Royalty in the Kuskokwim River 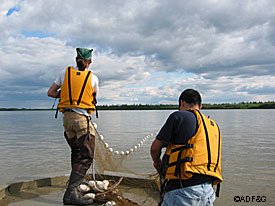 Fish and Game biologists set a net to capture king salmon. Radio transmitters will be implanted in the salmon, allowing biologists to track their upriver migration. Photo courtesy Lisa Stuby.

Some special salmon will be swimming up the Kuskokwim River this summer – salmon implanted with tiny radio transmitters, instruments that are doubling as “lottery tickets.” Folks catching these fish will be rewarded with more than fresh salmon fillets.

The summer of 2005 is the fourth season for an Alaska Department of Fish and Game (ADF&G) study of Chinook (king) salmon in the Kuskokwim River. The project uses radiotelemetry techniques to estimate abundance of king salmon above the Aniak River, located in the middle section of the Kuskokwim River. As many as 500 king salmon will radio tagged this year.

The Kuskokwim River is the second largest drainage in Alaska. This river drains a remote basin of about 130,000 km2 along its 1,130 km course from the interior of Alaska to the Bering Sea. The river supports five species of Pacific salmon, one of the largest subsistence fisheries in the state, commercial fisheries, and a sport fishery. Subsistence users have accounted for about 88 percent of the total harvest of king salmon from the Kuskokwim River between 1993 and 2002. The importance of this river to those who live along its shores can not be underestimated.

In this study Fish and Game uses gill nets and fish wheels (operated by ADF&G Commercial Fisheries Division) to capture king salmon. The fish are measured, their sex determined, and a radio tag (the lottery ticket) is seated into the stomach. Radio tags are little transmitters and each one puts out a particular frequency. The radio tag antenna trails out of the fish’s mouth. Since the salmon are not feeding on their long journey to the various tributaries of the Kuskokwim River drainage, this is a fast way to tag fish and get them quickly on their way. ADF&G biologists and technicians take care to minimize stress so the fish quickly recover. In addition, a blue spaghetti tag is sewn into the back muscles near the dorsal fin as a secondary mark so the fish can be identified even in the unlikely event that it regurgitates the radio tag.

There are advantages and disadvantages of using radio tags over using spaghetti tags alone. Because the route and final destinations of most king salmon that are radio tagged will be determined, the biggest advantage is the fewer fish need to be captured and tagged. Since 2002, ADF&G crews have attempted to radio tag 500 king salmon per season. The tags are spread among fish throughout the run, assuring that the radio tagged fish represent the entire run with respect to temporal abundance, size, sex, and stock composition. The biggest disadvantage of radio tags is the high cost of the tag itself.

From a few bends downriver from Kalskag to a few bends upriver from McGrath, there are 15 stationary tracking stations. Each tracking station consists of a set of antennae on a 20 to 40’ tall mast, a solar panel, and a weather proof box containing a receiver and data collection computer. The receiver detects the radio waves that are transmitted by each radio tag nestled in each king salmon stomach. The data collection computer tracks and records the location of the radio-tagged fish in a similar fashion that a radio picks up a favorite tune on a particular station. 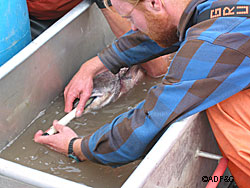 Every few weeks a biologist or technician visits each tracking station and downloads the information onto a laptop computer. In mid-July or early August, a biologist will fly the Kuskokwim River drainage from above McGrath down to the lowermost tracking station and locate radio-tagged king salmon that the receivers failed to record. Both the aerial and tracking station data give an idea of where the fish travel. In addition to an estimate of abundance, we can also look at what proportion of radio-tagged fish went to various stream - and in what numbers - helping to identify critical spawning streams. Five of the 15 tracking stations will have an additional transmitter that sends data to a geostationary satellite. Later, the project biologist will be able to download this data determine the operating status of the more remote tracking stations, and learn which fish have swam by those stations. It is always gratifying to tag a fish and detect it a few weeks later in the furthest reaches of the drainage.

So, what about that lottery ticket? If you capture and harvest a king salmon with a radio tag and/or spaghetti tag, and/or if you capture a coho (silver), chum (dog), sockeye (red), or Chinook (king) with a fluorescent pink, green, or yellow anchor tag (placed on the left side of the fish at the rear of the dorsal fin) return the tag or call the TOLL FREE number (1-866-881-2104) and you will be entered into a bi-weekly drawing for $200. The latter salmon will be tagged by CFD. In addition, CFD will also be conducting a pilot study this summer on sockeye salmon using radiotelemetry techniques. The first “tag lottery” winner will be drawn on Monday, June 20, 2005. Entries will also be entered in a lottery for one of four $500 awards, per species, which will be announced sometime in the fall of 2005. Any of the tags mentioned above that are found or caught will be eligible for the lotteries. So, if you live and fish within this drainage, or are planning on taking that once-in-a-lifetime fishing trip to the beautiful Kuskokwim River and capture one of these tagged fish, call the tag number in ASAP. For your convenience, the number is imprinted on the tags. Any radio tags that are returned will be sent back to the factory at season end and refurbished for use again next year.

Lisa Stuby is a research biologist who has worked for Sport Fish Division in Fairbanks since 1995. She has also supervised counting towers and supervised and/or assisted with radiotelemetry projects on salmon on the Copper and Unalakleet Rivers. Her office in Fairbanks is covered with salmon art.