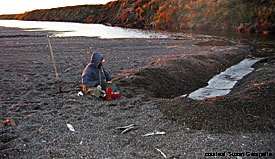 To catch Krusenstern Lagoon whitefish, Iñupiaq fishermen dig ditches in the porous beach gravel from the edge of the blocked outlet towards the ocean.

Imagine going fishing with little more than a shovel—no hooks, no lines, no nets—and being able to catch enough fish to keep you well-supplied for the winter.

That’s the way it is with fall fishing for whitefish in the coastal lagoons near Kotzebue, a community just above the Arctic Circle about 500 miles northwest of Anchorage. Here, near Cape Krusenstern, Iñupiaq families dig ditches in beach gravel to catch whitefish trapped in a lagoon with no outlet. It is an old tradition, one that has brought people together every fall for generations to put away food for the winter.

About 20 miles up the coast from Kotzebue lies the sizeable Krusenstern Lagoon and its web of interconnected lakes, ponds, channels, and freshwater creeks. This complex of waterways empties into the ocean through a single mouth, called Anigaaq. In spring, high water from break-up keeps this outlet wide and deep, easy to negotiate with a small boat and difficult to cross without one.

In summer the retreat of the sea ice exposes the coast to wind-driven waves. These waves move beach gravel along the shore, gradually closing the mouth of the lagoon until it is completely blocked, usually by late July or early August. Thousands of whitefish that had entered the lagoon to feed earlier in the summer suddenly find themselves trapped behind the dammed outlet.

As fall approaches, these egg-laden whitefish are eager to leave the lagoon for their spawning grounds. They crowd near the mouth, seeking an avenue for escape. This sets the stage for one of the most unusual fisheries in Alaska.

To catch these whitefish, Iñupiaq fishermen dig ditches in the porous beach gravel from the edge of the blocked outlet towards the ocean. The gradient of the ditch is a critical feature: water must flow steadily at its entrance but seep into the gravel at its end. The current draws whitefish out of the lagoon and into the ditch. The fish follow the ditch to its end where voila! . . . they find themselves out of water, flopping on the beach. Fishermen then simply gather up the fish with their hands and place them in gunnysacks.

This fishing method, developed long ago by the indigenous people of Arctic Alaska, the Iñupiat, requires little technology but a great deal of cleverness. It is a very simple and effective way to catch large numbers of fish, which in the past were needed not only to feed people but also their many dogs.

A couple years ago on a bright September afternoon, I watched a 76-year-old Kotzebue elder maintain a small ditch, or qargisaq as he calls it in Iñupiaq. He sat quietly by the ditch, shovel in hand, occasionally lifting a shovelful of small fish—mostly sticklebacks, along with small flounders and sculpins—onto the beach. If not removed, these small fish plug the gravel, causing the water to pool rather than to drain. Gulls quickly cleaned up these discarded fish. The elder occasionally pushed the shovel blade into the gravel at the end of the ditch, and wiggled it back and forth to encourage the water to drain.

While waiting by the ditch, this man reminisced about fishing in the days before snowmachines, when every family had their own dog team for transportation. “In early years when we had dogs, we kept the ditches open until December,” he said. “Boy, we’d get a lot of fish in those days. We’d pack them up to the top of the bluff and fill up holes about four feet deep. Just cover them up and then open them later in wintertime. That’s the best dog feed. When you open them, mmmm, it smells good!”

In the past, fishing for whitefish at Anigaaq was a critically important fall activity for Iñupiaq families in the Cape Krusenstern area. “The primary reason for being camped there for two months was to catch fish,” said a 78-year-old Kotzebue fisherman. “You wanted to put up all that you could get while you had the chance. The fish put up would last through until the following April. For dogs or people, either one.”

Because of the importance of this fishery, strict rules were formerly in place to help insure its success. For instance, elders forbid children to run or pound on the outlet ice because it frightened whitefish away from the mouth and back into the lagoon. Similarly, lights, noise, and even standing by the outlet were not permitted so as not to scare away fish. People had to crouch as they moved so the fish would not mistake them for a bear.

Local residents continue to dig ditches, but in the past 10 years gillnets for whitefish have become more common. Many things have contributed to this shift in fishing methods, one of which is the availability of nylon nets.

“Before the time of nylon, why, nets were not that easy to come by,” one elder explained. “People used to have a set-up for net-making in their cabin or tent, and whenever there were a few spare minutes, someone would be knitting away on the net. Nets were not as easy to come by then as they are now. And, of course, you used cotton string then. And that only lasts a couple of years before it rots. The scene changed dramatically with affluence and with the availability of nylon nets.”

Nowadays few families camp for the entire fall at Anigaaq. But this hasn’t diminished the vital importance of this place for subsistence activities. On any day in fall, a steady traffic of Iñupiaq hunters, fishermen, and berry-pickers make their way along the coast by boat or four-wheeler. Whitefish nets dot the channel. People stop to chat with each other, drink a cup of coffee, and share their observations of the natural world. They all know that in most years—with simply a shovel and their knowledge—they could gather as much whitefish as they needed to see them through the winter. In the far north, that is real security.

Susan Georgette worked with the Alaska Department of Fish and Game’s Division of Subsistence in Kotzebue.