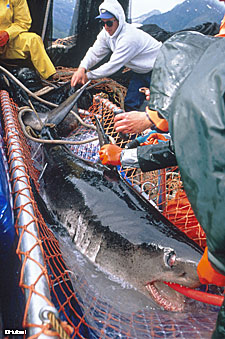 A female salmon shark is brought aboard to be weighed and measured. Photo courtesy Lee Hulbert.

Recent studies have revealed some surprises about one of Alaska’s most formidable ocean predators, the salmon shark.

The salmon shark is widely distributed in coastal and oceanic environments of the subarctic and temperate North Pacific Ocean. They range across the North Pacific from the Bering Sea and the Sea of Okhotsk to the Sea of Japan in the western Pacific, and from the Gulf of Alaska to southern Baja California, Mexico, in the eastern Pacific.

From July to September in Prince William Sound (PWS), large salmon shark aggregations are most often observed associated with adult Pacific salmon concentrations in bays and passes. As one might expect, during summer salmon are the principal prey in salmon shark diet in Prince William Sound. A Japanese scientist estimated that in 1998 salmon sharks consumed between 76 and 146 million salmon, which was between 12 percent and 25 percent of the total annual run of Pacific salmon for that year. However, salmon sharks are opportunistic predators that have a varied diet that includes Pacific herring, capelin, pollock, sablefish, rockfish, and squid even when adult salmon are locally abundant.

During the month of July from 1998 to 2001 Hulbert and his team used purse seines and hand lines to capture salmon sharks in Prince William Sound. Specimens were collected for information on diet and social structure (sex, age, length, weight, and maturity). Conventional and electronic tags were deployed to study salmon sharks’ distribution and movement patterns.

During the course of the study diet and maturity samples were collected from 51 sharks, 130 sharks were sexed, 16 sharks were tagged with satellite transmitters, and 246 sharks were tagged with conventional tags. In Prince William Sound 95 percent of the sharks sexed were females, with most ranging from 6 to 8 feet total length. This is in direct contrast to the Northwest Pacific Ocean, north of 52°, an area where 90 percent of the salmon sharks are represented by large males. 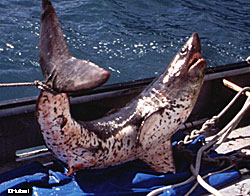 Hulbert and his team captured salmon sharks in Prince William Sound. Specimens were collected for information on diet and social structure (sex, age, length, weight, and maturity). Conventional and electronic tags were also deployed on the sharks.

Hulbert hoped to estimate the residency time and diet composition of sharks in Prince William Sound, as well as to describe salmon shark movements in the Gulf of Alaska and the eastern North Pacific Ocean.
“Basically, we sought to describe their behavior in the region,” he said. “Do they occur in Prince William Sound only during summer? What do they eat? Where do they go and why? What is the motivation for their movements – both vertically and geographically?”

“We believe that reproduction and energetics are the basic motivators,” he said. “It’s a balance between the temperature of the environment and the amount of food they’re taking in. They seek to optimize this balance to maximize reproductive success.”

Hulbert and his team suspect that the sharks use seasonal concentrations of prey in nearshore Alaskan waters - such as salmon migrations in summer - to store energy for movements and reproduction. Under this theory, energy conservation measures would entail large geographic movements to warmer temperatures in more southern latitudes as water temperatures and optimal prey density and quality decline in the Gulf of Alaska in the fall. As salmon runs decline, some sharks rapidly swim thousands of kilometers toward the warmer waters off the west coast of the US. Using Satellite transmitter, 16 sharks were tracked, One went 3,300 kilometers, Shelikof Strait to the Pacific ocean off the 1,000 kilometers west off the coast of Southern Californmia, between Dec. 2 and Jan. 8.

In some cases, however, a consistent source of concentrated prey, such as over-wintering herring aggregations, appear to hold salmon sharks in the northern Gulf of Alaska into winter months despite cold water temperatures.

One physiological adaptation that makes salmon sharks such formidable predators is that they are endothermic and appear to have the highest body temperature of all sharks. Salmon shark stomach temperature measurements have been observed to maintain a relatively constant 25o C (78o F), despite changes in depth and ambient temperatures. Core temperatures as much as 20o C (68o F) above ambient have been observed. The presence of a highly developed counter current heat exchange mechanism called the rete mirabile ("wonderful net") buffers the eyes, brain, muscles and body cavity from the large temperature changes associated with vertical migration, potentially conferring enhanced physiological performance. Endothermy is rare in fish, and has been found only in tuna, billfishes, and lamnid sharks. 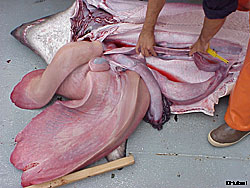 Among the advantages of endothermy is that warm muscles contract faster, increasing speed and agility in colder water. This means, that despite their large size, salmon sharks can accelerate quickly and maintain a high rate of speed over short distances, although they lack endurance of true warm-blooded marine mammals. Salmon sharks are classified as ambush/pursuit predators – they can attack from below and rely on speed and agility to catch their prey.

Female salmon sharks are ovoviviparous (bearing live young after eggs hatch in the female’s body) and can birth up to five pups annually. Mating occurs in the late summer and after a gestation period of nine months, birth occurs the following spring. Evidence of the energy costs of reproduction and large geographic movements can be seen in the size of the salmon shark’s liver during summer in Alaska.

“Energy from rich summer foraging opportunities is stored in the sharks’ livers which just get massive,” Hulbert said. “The majority of their body cavity is filled with liver. This energy fuels reproduction and migrations.”

Hulbert extends one personal theory to explain increases in observations of salmon shark aggregations in Prince William Sound in the mid-1990s. A moratorium on large-scale pelagic driftnet fisheries in the North Pacific in 1992 appears to have eliminated an important source of mortality for juvenile salmon sharks on the high seas near the Transitional Domain, a region described as parturition and feeding grounds for salmon sharks. The driftnet fleet numbered some 1,000 vessels, each of which deployed 40 miles of gear per night. The moratorium might have resulted in increased survival of juvenile sharks which migrate north to Alaska to feed as they mature.

The large numbers of salmon sharks observed in the mid-1990s in Prince William Sound gave rise to the idea of a commercial harvest. In 1996, a Cordova processor identified a market for salmon shark flesh. Using purse seine gear, fishermen were reported to have caught as many as 50 sharks in one set. However, the Alaska Board of Fish closed the fishery in 1997 due to a lack of information on salmon sharks.

Sportfishing charter companies, however, are still doing brisk business targeting salmon sharks. Anglers looking for a new challenge have found the salmon shark’s aggressive nature, large size, and fighting spirit to be just the ticket. Most charters operate out of Seward, Valdez, Cordova and Kodiak. Shark flesh has a high urea content, so bleeding and gutting must take place immediately, lest hundreds of pounds of meat go to waste. Properly processed salmon shark flesh is said to taste like swordfish, and freezes well.