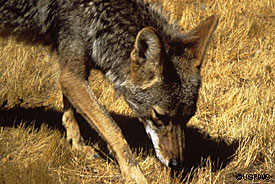 Coyote researchers found that wolf-killed moose and caribou are the second most important source of food for coyotes. Scavenging these carcasses is risky, as wolves will kill coyotes given the chance. Photo courtesy USFWS

Biologists investigating a decline in Dall sheep in Interior Alaska suspected coyotes might be playing a role. Their research has revealed some surprises about the opportunistic Alaska coyote and its interactions with other predators and prey.

By the mid 1990s, numbers of Dall sheep in the Central Alaska Range and the Yukon dropped to about half of what they had been a decade earlier. Hunters and wildlife managers were concerned. To understand the causes for the decline, biologists needed to learn more about sheep, especially lambs, and their predators.

Laura Prugh, a graduate student at the University of British Columbia, teamed up with Alaska Department of Fish and Game biologist Steve Arthur of Fairbanks. Prugh’s goal was to examine how the snowshoe hare population cycle affected coyotes, and how in turn that affected potential alternative prey such as Dall sheep.

Hares are the mainstay for coyotes, but hare populations fluctuate on 10-year cycles, crashing dramatically and forcing coyotes to find other prey options.

“We were concerned coyotes might switch to Dall sheep when hares crashed,” Prugh said.

Predation by coyotes and golden eagles is the major cause of mortality for Dall sheep lambs. Most of that predation occurs in late spring when the lambs are young and most vulnerable. But Prugh and Arthur did not find any increase in predation when hare numbers were low – in fact they found just the opposite.

Overall, there are fewer coyotes around in those lean years. Prugh found that when hare populations crashed, the coyote population declined by half. Without hares as a dietary mainstay, coyotes had fewer pups. Arthur and other researchers found the same is true of golden eagles. When prey is scarce, the big raptors simply don’t lay eggs.

Prugh and Arthur found that coyotes in their study area, in the foothills of the Alaska Range south of Fairbanks, tend to den in the alpine and have their pups at the same time sheep are lambing. Nabbing a few lambs in the spring is probably a boon for a coyote with a litter of pups, but it’s not a major part of the coyotes’ diet.

“When you look at the coyotes’ diet over a whole year, Dall sheep are pretty minor, three to five percent,” Prugh said. “Coyotes couldn’t make a living off sheep.”

Coyotes are quick to respond to increases or decreases in prey. They have fewer pups when food is scarce, or they can have large litters when hares are abundant.

“They just have more babies - if there’s a lot of prey and not much competition, they have really big litters,” Prugh said. “The record is 19 pups in one litter. Even if you knock coyotes back they'll bounce back, they’re even more resilient than wolves.”

Coyotes are newcomers to Alaska, arriving about 100 years ago. Populations were first reported in southeast Alaska. Over time they expanded north into the upper Tanana Valley, and then spread throughout most of the state south of the Yukon River. The highest densities of coyotes are found on the Kenai Peninsula, the Matanuska-Susitna valleys and the Copper River Valley.

“They extended their range throughout North America coincidental with the arrival of Europeans,” Prugh said. “Their original range was the Central Plains, and they’ve expanded in all directions.”

Coyotes likely benefited from forest clearing and agriculture, which increased rodent populations. Road corridors also may have helped expand their range. A major factor was the decline in wolf populations.

“Wolves kill coyotes - where they coexist, wolves are the major mortality factor,” Prugh said. “Coyotes tend to live in the ‘no mans land’ between wolf packs.”

When wolves were reintroduced to Yellowstone National Park in the 1990s, the numbr of coyote dropped significantly. Before the reintroduction of wolves, coyotes in Yellowstone subsisted largely on hares and rabbits. That changed after wolves arrived.

Wolves kill coyotes, but wolves also provide them with food. The smaller canids are adept at scavenging wolf-killed carrion. In Yellowstone, that’s elk. In Alaska, it’s moose and caribou. Prugh examined more than 1,500 coyote scats (droppings) to determine the coyotes’ diet. She found moose and caribou to be the second most common item in their diet, after hares. In years of low hare abundance, scavenged carrion became the mainstay for many coyotes.

Prugh said by the time wolves have finished eating a moose or caribou and abandon it, about a week after the kill is made, about 17 percent of the carcass is left. “Usually what’s left are bones, hide and the stomach contents,” she said. “Coyotes will eat that.” 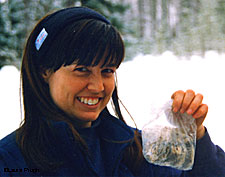 Eating everything from bears to porcupines

For the study, 19 coyotes were collared and equipped with transmitters. Prugh was also able to collect DNA from coyote scats and identify 56 individual animals, enabling the researchers to track the diets of specific coyotes.

“The bear was from a winter scat that had bear cub fur in it, so it's possible the coyote actually nabbed a cub from a bear den,” Prugh said.

Porcupine was an unexpected finding, Prugh said. Porcupines are less than one percent the coyote diet when hares are abundant, but when hare abundance was low, porcupine went up to about 15 percent of the diet. In terms of average biomass, one porcupine equals seven hares or 350 voles. It’s not a bad meal if a coyote can catch one.

“I suspect they might gang up on them,” she said. “What I’ve heard is they’ll try to back it up against a tree and grab by the face, flip it over and get into the underbelly. Steve found porky skins turned inside out, and I think one technique is to peel skin off.”

Even for coyotes that have learned some tricks, the prickly rodents are a risk. Prugh found two coyotes that were killed by porcupines.

“We had one pair that was feeding their young with porcupines, and the diet was about 40% porky,” Prugh said. “But that fall we found the mom dead, and her stomach was full of quills and punctured.”

Although coyotes are opportunists, they developed different hunting skills and strategies. Some coyotes focused on small rodents, others targeted carrion. In the long run, some strategies had their risks. Coyotes scavenging carrion sometimes had to face wolves, and Prugh found two coyotes that were killed by wolves.

Coyotes will hunt cooperatively, but it depends on what they’re hunting. Before wolves were reintroduced to Yellowstone, coyote packs with as many as 10 animals would successfully hunt elk. Prugh said with hares, a common strategy is for a pair to trot through the woods, flushing and then chasing down the prey. With small mammals, coyotes are most successful when hunting alone.

The typical social structure is a mated pair and offspring, Prugh said, and most offspring disperse in first year. In Alaska, coyotes are found mostly as mated pairs with an established territory. They have a stable social structure and they tend to mate for life, but will fairly quickly replace a lost mate.

Lone coyotes are not unusual, but are generally transients without established territories. Prugh did not see packs of coyotes in Alaska.

“They form a strong pair bond,” she said. “Once they set up a territory they’re pretty stable. They can survive hare lows, if they have a good territory. In our area, a territory is about 40 square kilometers, which is really big for coyotes. In Texas you may have several coyotes in a square kilometer. There’s a lot more food and greater diversity of prey there.”

The coyotes used rocky outcrops and old marmot holes as dens, which provide protection for the pups. Dens are used only for pupping in the spring, and are abandoned by June or July.

Prugh said she rarely saw the coyotes she was studying – and that was part of the plan.

“We made an effort to avoid them,” she said. “We were trying to record what they’re doing naturally, and we didn’t want to alter their behavior. They’re really quite secretive and they’re so perceptive, they hear you coming and hide in the brush. I saw them just a handful of times darting into woods.”

When they tuned into a radio-collared coyote and found fresh tracks, the researchers worked backwards, moving away from the animals to collect scat and study prey remains. On one occasion that led to an unexpected find.

“I was tracking a coyote in February and woke up a denning grizzly bear,” Prugh said. “The coyote tracks went right past this mound of dirt and then I lost them. I went back to the mound of dirt, realized there was a hole there, and when I squatted down to look in the hole, I noticed the entire entrance was filled with the head of a grizzly, that was sniffing the air. I just about had a heart attack. Luckily it didn't come out of the den.”