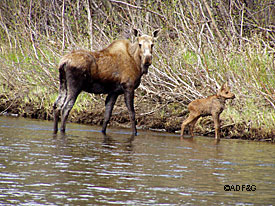 Every year, Fish and Game recieves reports of "abandoned" baby animals. In many cases, the mother is nearby and the youngsters are best left alone

Dealing with orphaned wildlife is a difficult and emotionally charged situation. People’s opinions vary greatly on issues of letting nature run its course and placing wild animals in captivity. People are advised to leave animals alone. It is often in the animal’s best interest to leave it in the wild, because captivity is not always an option nor is it the best use of Alaska’s resources.

Regardless of circumstances leading to an orphaned animal situation, the division must decide on a course of action. Three options are available to the division: leave the animal in the wild and let nature run its course, attempt to place the animal in a zoo or game park, or humanely euthanize an animal if placement isn’t available or the animal’s health is questionable. It is the policy of the division not to intervene on the behalf of orphaned wildlife when possible. There is a misconception that Fish and Game can find a home for all orphaned animals; however, that is never a guarantee.

The majority of orphaned animal cases result from people who happen upon an animal they believe is orphaned, usually moose or bears. According to state regulation, possession of live game is prohibited, this includes orphans. There are many reasons not to pick up an orphan; apparently orphaned animals may not be orphaned at all, their mothers may be hunting, browsing or only a short distance away but hidden from sight. For example, female black bears will often run cubs up trees while they hunt or fish. Once humans become involved in orphan animal situations, rarely can the animal be returned to the wild and the division must intervene.

When the division intervenes, several considerations must be made before moving forward. What are the conservation concerns? Are there viable options for the orphaned animals (e.g., is there a chance they will survive in the wild)? Are proper placement options available? What are the effects on the division? If it is appropriate and effective for the division to take action, the first thing to do is to acquire the animal and temporarily place it while arrangements are being made for permanent homes. Typically, the division will not expend extraordinary efforts to acquire reported orphans; the majority of them are delivered to state officials or other live game permit holders. Once temporary holding is established, permit section staff in Juneau begin the search for permanent holding facilities.

Wildlife conservation permit staff occasionally receive requests for various game species from zoos and wildlife parks. No action is taken on these requests until a specific animal or animals are identified for placement. Once identified, permit staff contact the facility to inquire if they are still interested and if so direct them to apply for a Scientific and Education Permit. Concurrently, staff will contact federal and state wildlife agencies to determine if an interested facility is appropriate for consideration. Permitters take into account experience with a particular species, facilities and holding areas, education programs and the overall reputation of the zoo or park. We will place game animals only in reputable facilities that we believe will provide the best care for the animal.

Bear cub placement is different in that the American Zoo and Aquaculture Association maintains a working group known as the Bear Taxonomic Advisory Group (TAG). An individual within the group acts as a clearinghouse for bears and is our contact for bear placement. The same information is gathered by the TAG, and we rely upon them for recommendations for bear cub placement. Once all the information is gathered and a facility is chosen to receive the animals, a permit for transporting and holding is issued to the applicant. Normally, animals are transferred within a couple weeks of permit issuance.

If you have any questions regarding an orphaned animal, please contact your local Wildlife Conservation office, or Tim Peltier in the permit section of ADF&G headquarters at 465-4190.

Ryan Scott is a permit biologist with the Division of Wildlife Conservation.