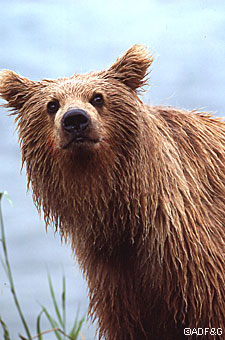 Studies indicate that bears probably see about as well as humans, but trust their sense of smell more

There are a lot of misconceptions about bears. “Grizzly bears can’t climb trees,” or “bears can’t run downhill” – both untrue. One common misconception is that bears have poor eyesight. The reasons behind this misconception are understandable, but evidence indicates that bears’ eyesight is comparable to ours.

Reynolds is a bear biologist for the Alaska Department of Fish and Game in Fairbanks and serves as president of the International Association for Bear Research and Management. He’s worked with bears for 45 years. Reynolds and another biologist once observed a large adult male grizzly that had killed and was eating a 2-year-old grizzly in the western Brooks Range.

“It was late September and the ground was snow-covered when we peeked just our heads above a ridge that was a quarter-mile distant from the bears,” he said. “The adult male immediately stopped what he was doing, stared our direction, and ran – and kept on running until he was out of sight. If there was a wind it was only slight, and I don't recall it being at our backs. We were very aware of bears’ extremely perceptive sense of smell, but from the evidence available to us at the time, it seemed most likely that the bear was alerted by its eyesight.”

Zookeeper Lee Huntsman operates a privately owned animal park just south of Cleveland, Ohio. He has 240 animals – 60 different species – including black bears and Syrian bears, a kind of Asian grizzly. He’s worked with 30 different bears over the past 10 years.

“We raise them from babies, and when they see a specific person, they react differently than they do to another person,” Huntsman said. “They respond to the people that feed them, and not others. And it’s not that they see the feed bucket, they recognize the people. They can see in detail. They have good vision, and I’d say they can recognize a specific person from 200 feet away.”

Huntsman said bears also see well in low light conditions. “I can go up at night and they can see me plainly; I can tell because of the way they react. I definitely think they see well at night.”

Like many animals, bears’ eyes have a reflective layer called the tapetum lucidum lining the back of the eyeball. This layer reflects light back through the retina, allowing light to stimulate light-sensitive cells in the retina a second time, thereby improving night vision. This is what gives dogs, cats and many nocturnal animals that distinct, bright eyeshine when they are flashed with a light at night.

Polar bears have special adaptations that help them to see underwater. Like many other marine mammals, they have a clear inner “eyelid” called a nictitating membrane that protects their eyes and serves as a second lens when they are underwater.

John Hechtel has spent decades observing bears in the wild and studying behavior, hibernation, and bear and human interactions. A state biologist in Palmer, he’s worked with bears throughout Alaska and the Yukon. Hechtel emphasized that just like with people, there is variation among bears.

“How many humans really have 20/20 eyesight? There’s a tremendous variation, nearsighted or farsighted, and with increasing age, sensory abilities decrease in general. Eyesight tends to get worse, hearing is not so good any more, and it’s probably similar with animals,” he said. “In general, their eyesight – for young healthy bears – tends to be pretty good. There is a fair amount written about how poor their eyesight is, but I don’t think so.”

From his experiences, Hechtel has the impression that seeing silhouette and movement is an important part of bears’ distance vision. There isn’t a lot of research on the topic of bear vision, Hechtel said, and stories range from incidents where bears see extremely well to stories where bears seem nearly blind.

“For now, bear biologists tend to say that bears’ eyesight is similar to that of people. That doesn’t mean bears essentially see the way we do. I suspect, in some ways they see better – night vision, for example, and in some ways maybe worse, like distant, non-moving objects. The point is that bears aren’t wandering around half-blind. And they are much more focused on interpreting the world based on smell than sight.” 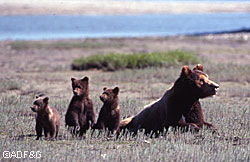 Bears see well, but seeing silhouette and movement is an important part of bears’ distance vision

Hechtel said most misconceptions about bears are born of limited experience and assumptions. A person will assume that because a bear didn’t respond to them, it didn’t know they were there. That bear may have smelled the person – and saw them – long before the person was aware of the bear.

“A lot of times bears see things and don’t visibly react by standing up or fleeing,” Hechtel said. “That doesn’t mean it didn’t see. People expect bears to react when they see something, and that’s not always the case.”

“We rely so much on our eyes,” said state game biologist Phil Mooney of Sitka. “I don’t think bears think like we do. They don’t think in terms of their eyes. If you’re walking through grass flats and a bear stands up, it’s using all of its senses.”

Larry Aumiller is the manager of the McNeil River State Game Sanctuary. For 28 years, he’s spent summers with brown bears at the sanctuary, 180 miles southwest of Anchorage. He recalled an incident one spring where a large adult male was following a female in estrus.

Aumiller wrote: “He was trying to keep up with her until she was receptive. She, not being quite ready, was trying to stay ahead of him. This is called consorting, and eventually ends in mating when all parties are ready. The male typically puts his nose to the ground, and no matter what, follows her exact footsteps. On this day her journey took her on a route that doubled back, bringing her to within 100 feet of the pursuing male. He glanced over at her, put his nose back to the ground and continued on her exact trail (scent) even though it took him several hundred yards out of his way. This is a good example of a bear trusting his sense of smell more than his vision.”

In Aumiller’s experience, he thinks bears see on a par with humans up to about 120 yards, and beyond that their vision drops off. He’s found it’s easy to stalk a bear at longer distances, especially if you are careful about using cover and disguising movement.

“You can approach a bear at distances that would never work with a prey species, for example a deer. This makes sense if you think about it, the “distance of concern” for a bear is considerably less than 100 yards. Bears have evolved to be concerned only with - and react to - stimuli within their personal space, which varies of course (smaller for more dominate bears) but is generally about 100 to 200 yards. This fits with being a predator as opposed to a prey species, as well as being the biggest, baddest guy on the block.”

“They can see very well at night, far better than humans,” he added. “Remember the exception of course, the bear that spotted you at 400 yards, and the one you walked right up to in the open - and at 40 feet it finally did see you and came unglued. But these are rare exceptions.”

Hechtel said over time, our insights should get better as scientists address some of the unanswered questions regarding bear vision.

“Who knows exactly what bears are seeing,” Hechtel said. “The exciting thing about studying bears is it’s a fairly new field. The span of intense bear study has just been a few decades. There are still a lot of cool things to understand about bears.”