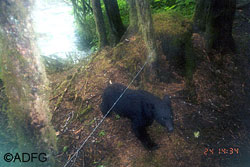 A remote camera captured this image of a black bear walking under a hair snare.

A project involving bear hunters, antibiotics and barbed wire has provided revealing insights into one of the world’s densest populations of black bears, on Kuiu Island in Southeast Alaska.

Bear researcher Lily Peacock found that Kuiu Island, about 40 miles west of Petersburg, has three to five bears per square mile. Peacock also found that surprisingly high numbers of bears coexist seasonally on salmon streams on the island. She counted 115 different bears using a one-mile stretch of stream during a two-month period.

“Using modeling techniques that look at patterns of capture and recapture, we estimated about 175 bears used that segment of that stream over two months,” Peacock said. “That surprised me. It was corroborated with other work that I did, observing bears from tree stands.”

Peacock said it’s difficult for an observer to keep track of that many different bears. A casual observer might see 20 bears, she said, but you don’t know if that’s seeing five bears four times or 20 different bears. To identify individual animals, she used the same genetics techniques forensics experts use on crime scenes, extracting DNA from hair follicles. Using hair snares, Peacock collected 1,554 hair samples from trails along seven streams in 2000 and 2002.

The hair snares are simply a single strand of barbed wire strung between trees. The barbs snag tufts of hair from passing bears, and by carefully monitoring the snares, Peacock was able to identify individual bears and their patterns of use of the stream.

The Alaska Department of Fish and Game and the Forest Service’s Petersburg Ranger District worked with Peacock on the four-year project, which was part of her Ph.D. dissertation at the University of Nevada, Reno. Wildlife biologist Kim Titus, now Deputy Director for the Division of Wildlife Conservation, served as Peacock’s Alaska advisor.

Titus said Fish and Game provided the primary funding for the research and initiated the project because of concerns about the high harvest of Kuiu Island black bears by hunters.

The island is renowned among bear hunters, Titus said, and the big game guiding industry shared wildlife managers’ concerns about the island’s bears. The cooperation of guides and hunters was instrumental in the success of the project.

“We had tremendous support and interest from Petersburg Ranger District - Tongass National Forest staff,” Titus said. “The project really paid off. Fish and Game needs this information to work with the Board of Game and bear hunters in setting appropriate harvest levels. The Forest Service issues permits for big game guides and some transporter operations. This research helps ADF&G and the Forest Service manage this world-class black bear resource.”

Peacock and Titus said there is not much research on black bears in Southeast Alaska, or how black bears use salmon streams.

Peacock was surprised by some of the differences in behavior between black and brown bears. Bears deal with the safety of their cubs in different ways, she said. Brown bear mothers keep their cubs close at hand, but black bears often leave their cubs while they fish, usually sending them up a tree.

Despite of the high numbers of bears on the streams, Peacock rarely saw bears fight. She said the bears are sexually segregated, with males and females fishing at different times, and the average stay on a stream for a bear was two weeks. She said that although bears are solitary animals for the most part, they are forced to be together on the salmon streams, and they’ve developed mechanisms to work together in these seasonal high densities.

“They keep their distance from each other,” she said. “With this huge density you’d expect more conflict, but there wasn’t. They avoid each other. Brown bears up north can be pretty scarred up from fights. But not these bears, they look beautiful. Not many scars. They’re behaviorally pretty mellow. They have this dance - males here, females there.”

Titus said the super abundance of food helps relieve a lot of the potential stress in the population.

Peacock worked with hunters to estimate the total number of black bears on Kuiu Island. She used a standard technique called mark-recapture.

“The technique is fairly old fashioned, and it can be used on animals from salamanders or snails to whales,” Peacock said. “You mark a sample of population, say 100 animals, and then go back later and catch or resight another sample. Part of that second sample will be marked from the first time. If only two of the second sample were marked from before, then you probably have a pretty big population. If you recapture 99, it means you did a good job getting marks out there, and marked almost every one.”

Tetracycline, a commonly administered antibiotic, was used to mark the bears. When tetracycline is ingested by a bear or a human, it leaves a mark on bones and teeth. The mark is visible when a cross section of bone is examined under a microscope with ultraviolet light. 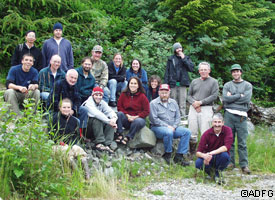 Part of the Kuiu Island research team, with Lily Peacock at left.

“Our bones and teeth are constantly growing and remodeling; new material is being absorbed and created every day,” Peacock said. “If a bear eats tetracycline, a tiny layer appears. Capturing bears is expensive, so we let the bears mark themselves.”

Peacock designed bait stations that minimized chances of animals other than bears taking tetracycline-laced bait. In June of 2000, about 200 stations were set up along roads and beaches in the area that connects northern and southern Kuiu Island, and about 130 bears were marked. In 2002, 263 bait stations were established, one on every square mile of the island, and about 195 bears were marked. The number of bears marked was based on the number of baits consumed by bears.

Bear hunters were asked to submit a toe bone from bears they killed, and that provided the “recapture” data. Titus said cooperation from hunters was almost 100 percent.

Of 166 bears harvested on Kuiu during the 2000/01 hunting season, 11 (6.6%) were found to be tetracycline marked. Overall, Peacock found 32 marks in 503 samples taken from Kuiu and nearby Kupreanof Island. Peacock estimated the population of black bears on Northern Kuiu Island to be 1,019, and the overall density to be about four bears per square mile. The results were consistent for both rounds of the study.

“It’s a snapshot in time,” she said. “You need several estimates to determine trends, whether the population is stable, increasing or decreasing. Some people have said that there used to be more bears on the island, and the population is decreasing. But this study wasn’t designed to address that question.”

Titus said Fish and Game will continue to refine the population estimate with additional samples from bear hunters. The tetracycline mark will stay in the bones of marked bears for four years. Hunters have harvested black bears on Kupreanof Island that were marked on Kuiu, so Fish and Game is requesting toe bones from all black bears taken on both Kupreanof and Kuiu islands. This will allow wildlife managers to evaluate the extent to which bears are moving back and forth between the two islands.