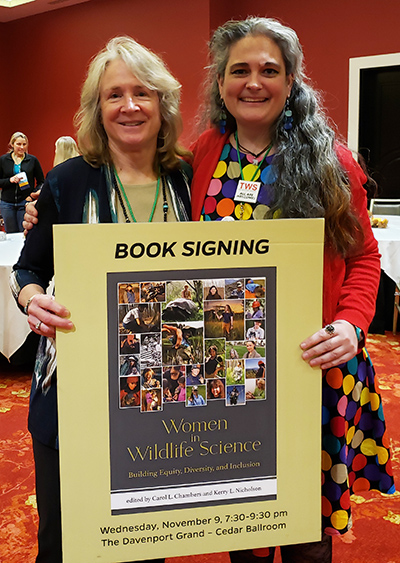 Among them are Kerry Nicholson and Carol Chambers, who published Women in Wildlife Science: Building Equity, Diversity and Inclusion, in October 2022. The new book addresses the challenges that women and minorities face in the wildlife profession and is dedicated to making positive changes.

Nicholson is a wildlife biologist with the Alaska Department of Fish and Game, focusing on carnivores and furbearers; Chambers is a professor of wildlife ecology at Northern Arizona University and recent president of The Wildlife Society. They initiated the project, edited the book, and wrote some sections, collaborating with 42 contributors and Johns Hopkins University Press.

“It can be used like a workbook. Beyond presenting the data, it has a lot of exercises, examples, and personal stories, addressing how it is possible to make positive systemic change in the wildlife profession,” Nicholson said.

The Wildlife Society proved instrumental in supporting the project. The Society is the international organization of wildlife professionals – research and management biologists, academics, educators and scientists. Chambers, who just stepped down as president, was the third women president in the society’s 85-year history.

Chambers and Nicholson started the book in November of 2018, but the concept for both began a decade earlier. Nicholson wrote a paper on women in the wildlife science profession in 2008, the year before she earned her doctorate. Her Ph.D advisor worked with The Wildlife Society’s book series (with Hopkins Press), and encouraged a collaboration between the women.

The Wildlife Society included presentations and symposia on topics related to diversity and inclusion at the annual meetings in 2013, 2016 and 2019. From those presentations, the idea for the structure of the book was born, and Nicholson and Chambers started the list of potential contributors. 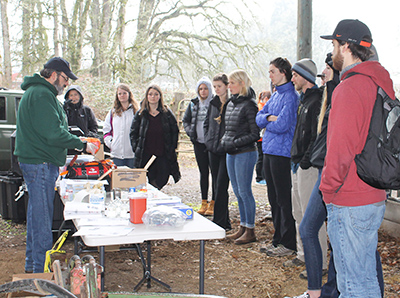 Darren Bruning teaching Wildlife Capture and Handling at Oregon State University. Bruning has taught the undergraduate class twice a year since 2008, and he’s seen a notable shift in the gender of students, from about 70% male in the early 2000s to about 80% female today.

Many were of those authors were present in November at the Society’s 2022 meeting in Spokane, which featured a half-day symposium on the issues addressed in the book, a book signing and presentation. Nicholson said the signing was overwhelming – and the book sold out.

“The room was overfull, people were spilling out into the hallway, there was not even room on the floor to squeeze in,” Nicholson said. “There was laughter and crying, it was pretty intense. A lot of head nodding – for speaking out, for saying something, lots of people feeling they had not been heard until now. And hope that people would listen.”

“The book’s publisher, Johns Hopkins University Press, provided over 100 copies for those interested in obtaining a copy at the conference. Tiffany Gasbarrini, the Hopkins acquisitions editor, was inundated with enthusiastic readers. She wrote dozens more orders to be shipped after the conference, as the stock nearly immediately sold out.”

“The room was electric. So many statements of, ‘This is so needed, thank you.’ There were requests for translations into Portuguese and Hungarian - beyond the typical German, Spanish and French. We signed about 98 of the 120 books, I think. We had about 20 of the 42 authors signing and maybe 25 of the authors attended the conference.”

The book opens with an explanation of why this topic should be of interest to the scientific community, Nicholson said. Why we should be striving for diversity, the importance of having resilience in the professional workforce and how it will make for better science. We then transition into a history chapter – going back to early women scientists, and through different generations of women and their contributions focusing on the barriers they faced and what they overcame to have successful careers. The third chapter looks at universities, and the fourth looks at federal and state employees and agency work. 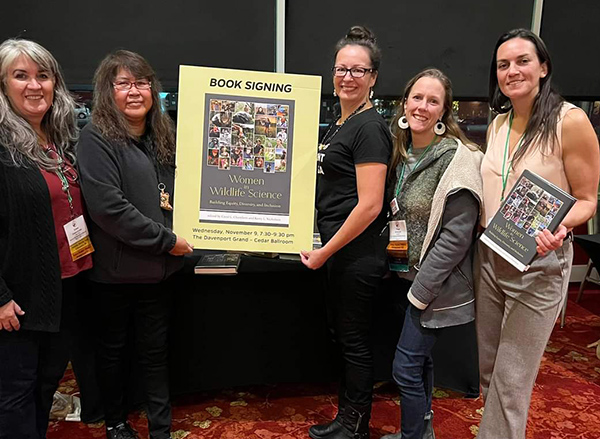 When we look at where we are now, in the university system and the changes that have occurred just between 2005 to 2020 – the gender swap that’s occurred in graduation ratios. “Now many more women are graduating with undergrad degrees, but it slows down the farther you go in schooling,” Nicholson said. “There is not much change in leadership positions in the work force, that’s an area that’s lagging behind. The ratios aren’t equivalent. In higher education and leadership, it’s less than 30 percent. To some extent it’s zero when looking at things like department heads at universities.”

“The fifth chapter explores the systemic issues and approaches for why we lack diversity in the profession,” she said. “Cultural differences, the sociological differences that have support and continue to support this trend.”

The second portion of the book presents perspectives from specific voices, Nicholson said. “Black women, native and indigenous communities, millennials, LBGTQ+, and from a man’s perspective and the role men can play in facilitating change. There is a chapter on the subtle barriers, things most people don’t even consider – monocultures at a workforce, tokenism, women suppressing other women, the "queen bee syndrome," dealing with menopause, working outdoors in the field and having to pretend my body functions like a man’s so I am not ostracized from doing the work.”

She said one subtle yet overlooked example of a barrier is work clothing and gear that is designed for men. Clothing that does not fit women well or function properly, and sometimes options aren’t available. Part of the reason is economics – gear isn’t adapted or customized for women or people of color because they don’t represent a large, monetarily rewarding market share. 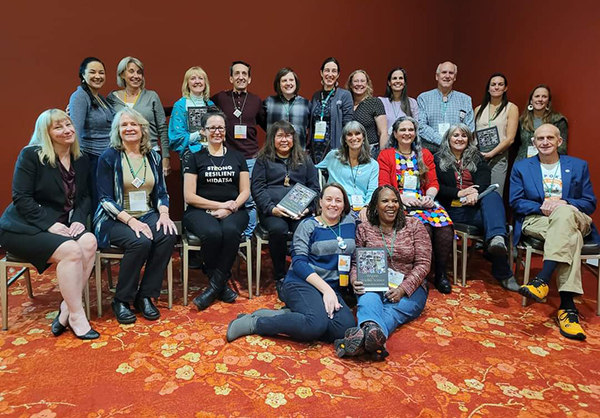 More contributors to the book iclude: Travis L. Booms, back row 4th in from the left, who co-authored Chapter 8. Breaking the Binary: LGBTQ+ Wildlifer Perspectives, is a research wildlife biologist at the Alaska Department of Fish and Game in Fairbanks. Tiffany Gasbarrini, first seat from the left, is senior acquisitions editor from John Hopkins University Press. Carol Chambers is next to Tiffany and co-editor of the book. K. L. Nicholson, front seated row 3rd from the right in red. Gordon Batcheller, first seat from the right, is The Wildlife Society president (at the time of the photo, he just assumed the role of Immediate Past President) and co-author of Chapter 11. The Responsibilities of Men in Supporting Women. Batcheller is a Certified Wildlife Biologist, TWS Fellow, and retired chief wildlife biologist for New York State.

“Not having proper safety gear that takes into consideration the entire workforce is a subtle yet constant reminder that our society does not consider women capable of doing the work,” Nicholson said. “That these jobs ‘weren’t meant’ to be done by women, so why should we accommodate their needs? It’s a smack in the face; a ‘you don’t belong’ sign. Women have to continually be reminded that this field is not welcoming or willing to accommodate them.

“We do have a chapter about things that are working today,” she said. “Chapter 10: Models that Work has examples of scholarships and mentorships programs. Opportunities to increase diversity and inclusion in the scientific fields. Actions and steps that agencies and businesses have taken within their own programs and are successful.”

Every chapter has an exercise to teach a lesson that can be used in a classroom setting or a training session. The book offers resources, little things you can do right now, and how to be an ally. How to help make change. Every chapter has a vignette or side-story.

In one vignette, Nicholson interviewed Professor Christine Thomas, who started the Becoming an Outdoor Woman (BOW) program, to tell its origin story. BOW began in 1991 in Wisconsin, teaching fishing, hunting and outdoors skills to women. The program, which features weekend workshops and hands-on field classes, spread to dozens of other states in the ‘90s and 2000s and is very popular in Alaska, where it is organized by ADF&G. 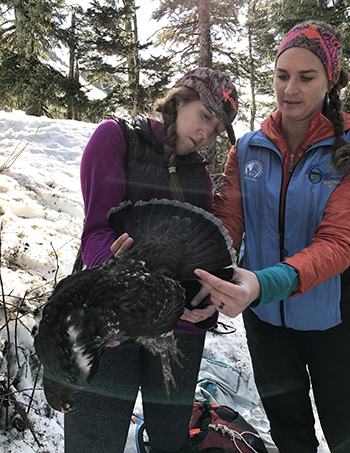 Stephanie Sell, (right) a wildlife biologist with ADF&G, looks over a grouse with Erin Heist, a participant in an introductory hunting workshop Sell taught through the Becoming an Outdoors Woman Program.

“I’ve seen an increase in awareness and acceptance,” she said. “The younger generation is coming in with an attitude and an expectation to be treated fairly. I see the younger generation more empowered, but they don’t have the life experience yet – the juggernaut of pushback from the systemic issues. On an individual basis I’ve seen small changes in my personal circles. I haven’t seen a major community wide push to really make change happen. I think there still a lot of social resistance. It’s universal, not just in the wildlife field, and it affects everyone in any science career. Change is very slow, which is to be expected, so we can't rest on our laurels thinking all will continue, we need to keep the momentum going.”

One positive step is that The Wildlife Society recently hired Jamila Blake as the Professional Development Manager. She has helped establish a Diversity, Equity and Inclusion vision and strategic plan, she’s created a DEI network, and she facilitates incorporation of DEI initiatives into the operations of the organization. She also co-authored three chapters of the book.

Women in Wildlife Science: Building Equity, Diversity and Inclusion is available immediately for download as an electronic book. Nicholson said the publisher plans to make it available as open source to increase its accessibility, it can be viewed online (but not downloaded) so anyone with internet can access it.

Nicholson said all of proceeds from the book will be donated back to DEI programs.