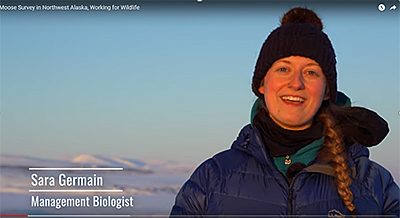 How do you learn what is killing baby muskox? How can a hunting dog help biologists learn about grouse and ptarmigan? Two new Working for Wildlife videos answer these questions.

Working for Wildlife is a new series of three-to-five-minute videos featuring Fish and Game biologists and their work with Alaska wildlife. The series debuted in April with a look at biologist Sara Germain’s aerial surveys of moose near Nome. She narrates a flight over the snowy tundra on a beautiful fall morning, pointing out moose as the plane circles. Animated maps, graphics, still photos and engaging footage present a concise and accessible overview of her work.

Working for Wildlife is produced by Fish and Game’s Wildlife Education staff, led by Assistant Director Kristen Romanoff. Wildlife educators work with biologists to gather footage, record audio, take pictures and hone the narration; the educators then focus on editing, mixing sound, and visual effects to create the final cut. They collaborate and share expertise with each other as they learn. 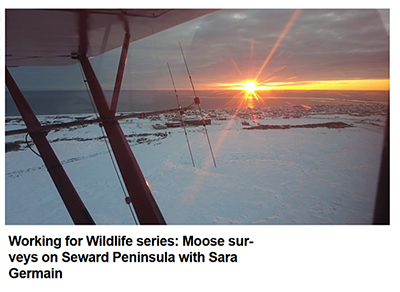 “Everybody is past the video-production-intimidation phase,” Romanoff said. “It’s fun to see.”

Fish and Game staff have been producing “learn how to…” videos for a decade or more, mostly focused on fishing and hunting. The COVID pandemic inspired Romanoff and her colleagues to really ramp up video as an outreach tool. The moratorium on in-person workshops, events and presentations required new approaches, and Vimeo, Facebook, YouTube and the Fish and Game website offered accessible platforms to reach people.

“People are interested in wildlife and how wildlife is managed in Alaska," Romanoff said. “We also receive requests from schools and career centers regarding types of jobs and, ‘what does a wildlife technician or a wildlife biologist do?’ This is a glimpse into the working life of a wildlife professional.”

One thing Romanoff especially likes about the Working for Wildlife series is the ability to reach many people. “As educators, we’re used to interacting with the public, and doing these videos is a way of interacting with a larger audience now and in the future.” 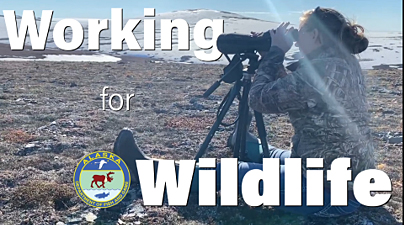 In the most recent release wildlife biologist Brynn Parr highlights her work radio-collaring muskox calves to learn about their survival over their first year of life, and the causes of mortality. The four-minute documentary shows Parr and her colleagues capturing baby muskox, quickly collaring them with transmitters, and releasing them back to their group. Parr explains how she’s able to locate these calves from the air, and if they have died, visit the “kill site” and investigate what happened and the kind of predator involved, if predation is the cause.

“It was a lot of fun to be able to talk about my project knowing there was footage to show what I was talking about,” Parr said. “And I love knowing that the short video will reach so much farther geographically and to a much larger audience than I could do on my own.” 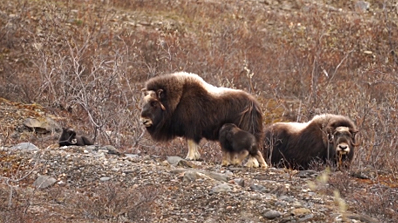 Biologist Rick Merizon manages Fish and Game’s Small Game Program. He jumped at the chance to feature the collaboration between trained dogs, their handlers and biologists. Grouse and Ptarmigan Brood Surveys offers a look at how these volunteers and their canine companions help biologists monitor upland game bird populations across Alaska.

Merizon has led workshops teaching hunters how to field dress hares and ptarmigan. He’s written numerous articles and is a strong advocate for public outreach. Wildlife Educator Sierra Doherty worked on the new production and said Merizon and the brood surveys were a good fit for Working for Wildlife. 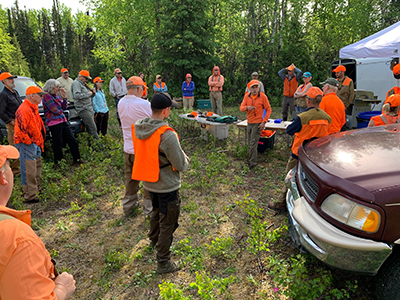 “The dog handling citizen science program is so cool,” she said. “It’s a strong program in terms of getting quality data. It started in three sites and it’s growing across the state. We need more volunteers, and this is a way to pay tribute to the volunteers and the dogs. This program started as a model in Norway - Rick has followed that methodology and it turns out it works well here too.”

She said the dogs love to work, Merizon is good on camera, and two key volunteers were happy to be interviewed and featured. Doherty and her colleague Heather Jameson did the production work and contributed footage, along with Merizon, Joelle Hepler, Tim Bowman, and Jim Willliams. Some of the footage includes cringe-worthy hordes of Alaska’s famous mosquitoes. 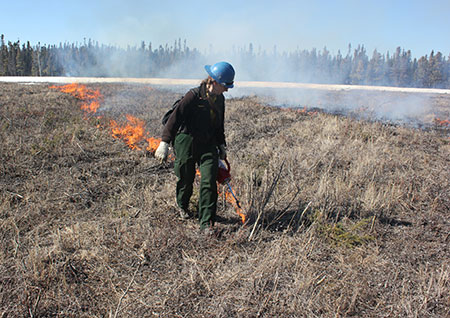 ADF&G forester Sue Rodman puts fire on the ground during a prescribed burn.

Doherty is extending her production skills to short bear safety messages and wrapped a bear safety PSA highlighting mountain biking and high velocity sports with her colleague Olivia Sasser, to post on social media. “We just finished up at Government Peaks Recreation Area. We’ve got Olivia getting ready to hit the trail on her bike asking, ‘what should I know before I go?’ then closing with ‘I better share my plan with a family member, grab some bears spray, and get a friend to go with me.’ That’s the take home message.”

Her next project is a new Working for Wildlife episode featuring brown bear researcher, wildlife biologist Nic Demma and will include bear captures and collaring. Wildlife Educator Mike Taras is working on a production highlighting the use of prescribed burns to enhance wildlife habitat.