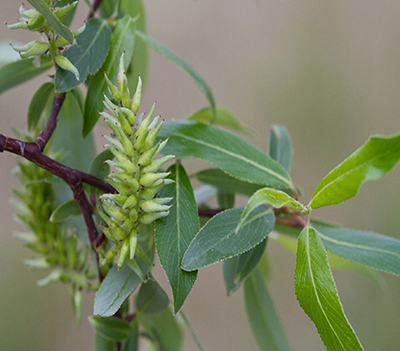 Willows are amazing. I’m not talking about my dog Willow (who is amazing, and maybe my bias is showing, but she is). Having grown up in the UK, the willow tree I was familiar with was the white willow (salix alba) with cascading, trailing branches and leaning boughs. Imagine my surprise when I came to Alaska and discovered willows could be tall and upright. They have a magic all their own here; and now in the springtime their puffy catkins are starting to ripen.

Selieach is the Gaelic word for willow; Uqpik is the Iñupiat name for feltleaf willow, and Sura, diamond willow. A supple, durable wood, its use stretches back thousands of years, providing food, tools, shelter and medicine. This gives it a sense of mysticism, I think. The ancient Romans used willow in their basketry. Baleen baskets of Native Alaskans were adapted from coiled willow-root baskets. Willow has been used for Dutch clogs, ancient Greek harps, and English cricket bats. Willow has featured in cultural, spiritual, and practical aspects across the world.

In ancient texts from Egypt, Sumer, and Assyria, willow is cited as a remedy for fevers and aches. Willow is a natural source of salicin in the form of salicylic acid, which has been artificially synthesized for medicines such as aspirin. Native Alaskans source it directly, infusing it in teas, or creating tinctures to treat headaches, fevers, and other pain. Of course, you don’t want to go chewing on willow branches without some research - side effects of excessive use include stomach cramps and bleeding. 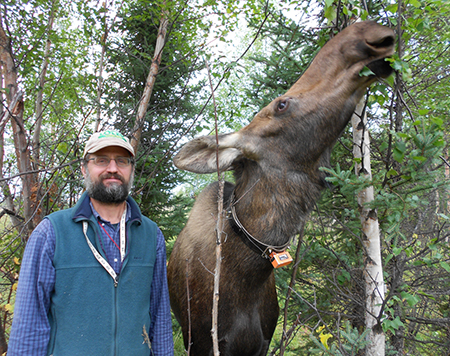 There are upward of 50 species of willow here in Alaska. They form shrubs and trees tall and short, and are notoriously difficult to identify. Some varieties grow at a rate of three to four feet per year. When trimmed, willow grows back quickly and ferociously.

We can’t talk about willows without talking about moose. To learn a bit more, I talked to biologist John Crouse with ADF&G’s Moose Research Center on the Kenai Peninsula.

“Willows, year-round, can comprise a very large proportion of moose’s diets,” he said. “In some of the more diverse diets, maybe less than 50 percent of their diet, but there are places where willows comprise of well over 80% of their year-round diets. It’s not just a single willow; and throughout the year it’s different parts of the willow.”

“In the summertime, they’re more focused on stripping the green leaves off the plant, whereas in winter, they’re biting off the twigs.”

“Moose have relatively small home ranges," Crouse said. "There are over 50 species of willows in Alaska, and far fewer than that are identified in the moose’s diet. Partly, we haven’t looked at all of it.” 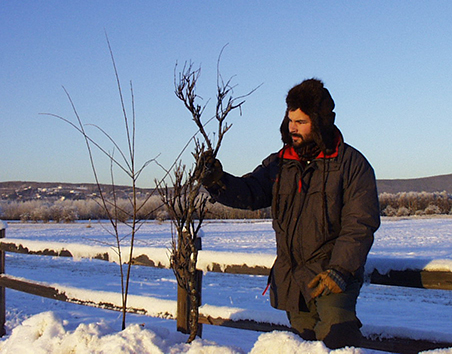 Wildlife biologist Tom Seaton led development of a browse survey technique to measure the biomass of offtake by moose, which reflects moose density. In this image of Bebb willows, the young plant on the left is unbrowsed, whereas the older plant on the right has been broomed by moose over several years. ADF&G photo courtesy Tom Paragi.

To be sure, we are still learning. As ADF&G biologist Dorothy T. Simpson wrote in 1984, “A moose biologist, then, must be part botanist, specializing in the various species of willow.”

Quantity is a big thing, I learned from Crouse; their intake rates are higher in the summer when they’re looking for a high volume of green plant material - particularly digestible energy and protein. In the wintertime, when they’re consuming twigs and bark, they’re looking for the cambium layer – the green, growing part of the plant between the bark and the wood.

But how do moose know which they prefer? Dorothy Simpson cited particular favorites. I asked Crouse if moose can determine taste like we can.

“Seasonally, they use their sense of smell to distinguish. They’ll walk up to plants, and without even biting them, they’ll avoid one plant, and just nearby, select another plant and take a bite from it. There’s different cues that the moose are probably using – sense of smell – moose have a very strong sense of smell, just having worked with captive animals where we’ve tried to formulate different diets for animals in different feed trials. We’ve learned that once an animal is used to eating one diet, even changing one small component on it, you can put it in front of them, even before they take a bite of it, they pull their head back and refuse it.” 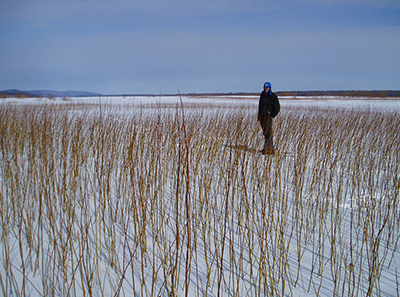 In part, that’s because willows aren’t content to sit there and be chewed to nothing. Incredibly, they’ll up their production of tannins. Tannins bind the proteins that fuel herbivores like moose, and they can render the willow just about indigestible, which makes them much less palatable to browsers. Moose need to discern between high-tannin and more digestible options.

Crouse cited a study where biologists were attempting to feed moose a harmless mineral marker by the name of chromic oxide. It’s indigestible, essentially a paint powder, used as a tracer in nutrition studies. They added two pounds of chromic oxide per thousand pounds of feed, milled it, and pelletized it.

“They could detect those pounds within a thousand pounds,” John said. “They’d come up to it and smell it and wanted nothing to do with it.”

What are moose seeking on their menu?

“They’re detecting other things,” Crouse said. “Greenness and moisture content of the plant, and perhaps even some of the secondary metabolites the plants produce. You mentioned the salicin in the willows, there’s other secondary plant compounds like the tannins and other things that moose are possibly able to detect.”

Moose and humans feed on willow. Other species that enjoy them are hares, who eat the bark and smaller twigs. Willow ptarmigan pick the buds. So, what signs do you look for that you’ve had a wild visitor in your backyard, or along your hike? In moose browse surveys, usually held in April, biologists are looking for stripped twigs. The catkins, as mentioned, appear before the leaves emerge, and those end up devoured too. The bite diameters are measured against annual growth that was previously removed. 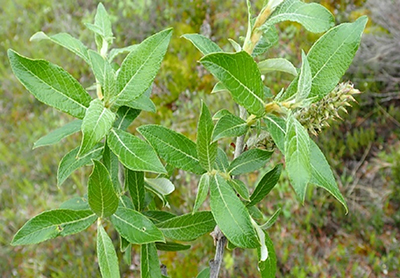 Feltleaf Willow (Salix alaxensis) - also known as big willow, river willow, or Alaska willow - they’re a moose favorite. They’re also favored by snowshoe hares and Willow Ptarmigan. They’re about 15-to-25-feet in height. They bloom late May through early June, which is especially important for our bumblebees; you’ll see them busily making the rounds around the yellowish, sometimes greenish, catkins. This is a mutual relationship. Seeds may be carried on the wind, but our pollinators – bees, flies, moths, and other insect species – help things along the way.

Feltleaf are a little easier to identify than other species, given that their spear-shaped leaves, which when mature have a pale, felted look and feel to the underside. They may have a slight wave as well. As winter sets in, the catkins will take on a wooly, tufty appearance, staying that way until early spring. 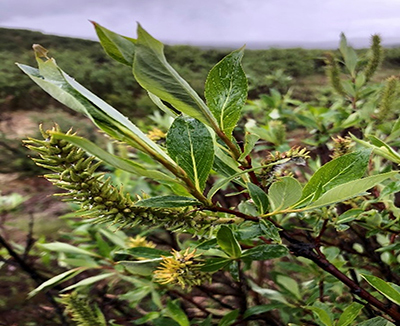 They are also a source of nutrition; the young shoots are said to taste like cucumber or watermelon. The cambium, or growth layer, is a source of vitamin C. Peeling away the bark grants access to that in-between layer of growth.

Diamond-leaf Willow (salix pulchra) - sometimes known as tealeaf, diamond, flatleaf, and other names, these willow grow all across Alaska, being perhaps 1 to 4 feet tall in bush form, and taller in the forests and swamps, reaching 15 feet. It is sometimes dubbed the “ice-cream” plant for moose. The leaves take on a diamond shape, and similar to Feltleaf willow, its colouring underneath the leaf is pale. It is less favored than feltleaf Willow and littletree Willow, but moose will still eat it well. Nutritionally, it is rich in vitamin C and Vitamin A.

Red-stemmed willow (salix arbusculoides) - Also known as littletree willow, this shrub – and sometimes a little tree – clusters densely. Moose particularly like this variety as well. This one’s an easier one to identify, as older stems have a reddish color. It can be found along rivers and creeks, and also favors areas of regrowth after a fire.

There is something to be said about being able to glance at the seemingly unremarkable trees, shrubs, and plants that surround you, and take a moment. Every broken twig, stripped branch, or blooming catkin may have a story to tell.