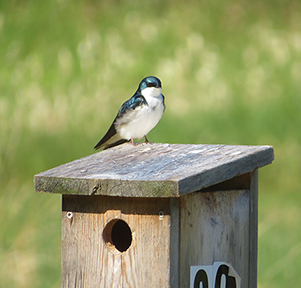 A tree swallow on a Juneau area nest box. Photo by Jessica Millsaps

In 2015, Juneau Audubon took over a tree swallow nest box project the U.S. Fish and Wildlife Service had started in 2005, in and around the Mendenhall Wetlands. The wetlands are in the heart of Juneau, stretching for nine miles between downtown and various suburban neighborhoods – and much of it is a 4,000-acre state game refuge managed by Fish and Game. Wright said the original goals of monitoring swallows were related to the nearby landfill and expansion of the Juneau airport, both adjacent to the wetlands. 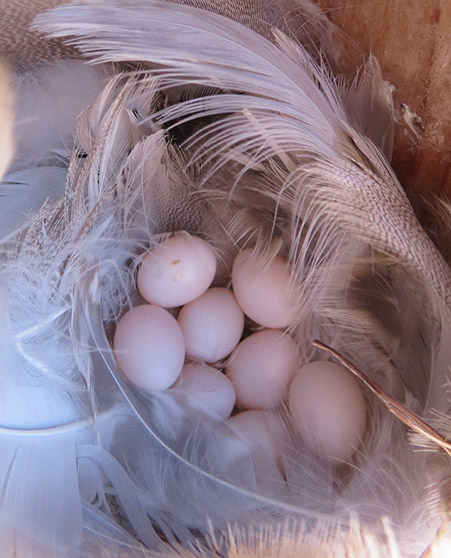 Tree swallow eggs in a nest box. Audubon volunteers are permitted to open the boxes and monitor the nesting success. Photo by Jessica Millsaps.

Initially 50 swallow nest boxes were put up on five-foot-tall posts. In 2015 Juneau Audubon received a $400 grant from the state Audubon office to rebuild the decaying boxes. The first year they replaced 32 boxes – but most went unoccupied. Since the early goals dictating placement no longer applied, they moved them to more strategic locations.

“We only had two nests that first year,” Wright said. “So, we went to the experts and learned a lot about improving nesting success, and we moved them. We also got ambitious and wanted more boxes.”

They worked with a class of Juneau fifth graders, who Wright said, “did an expert job” building 25 more boxes. Restrictions on placing “structures” on the state game refuge limited where the boxes could be placed. Some wetlands areas are managed by the Southeast Alaska Land Trust, which granted permission for the placement of some nest boxes. Better placement made a big difference and the second year they had 20 nests. 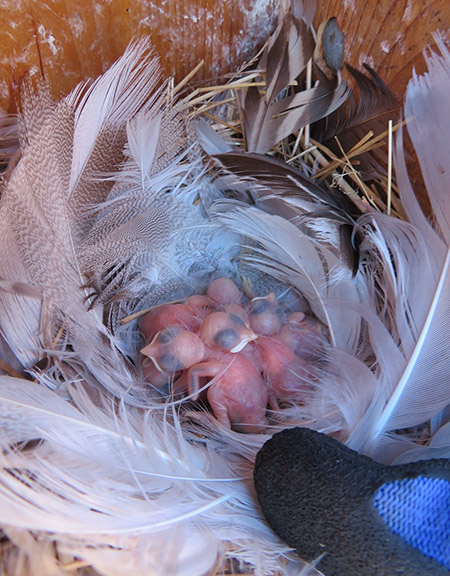 In spring of 2017 they put up 65 boxes, but disaster struck 10 of the nests near the Juneau Pioneer Home.

“Bears ate every single one in the Pioneer Marsh,” Wright said. “Cavity nesting birds are very noisy, and bears walking by a loud nest five feet above the ground knocked them down and ate the birds. So, we moved those.”

She said it may seem odd that birds that normally nest in trees would favor a nest box on a post out in a meadow, away from trees, but there’s bird logic at work. They may be avoiding red squirrels, which are big-time nest predators, and squirrels don’t venture out across the open wetlands. She said every once in a while, a northern pygmy owl will get into a swallow nest box – they’re small bird predators and small enough to get through the box opening. 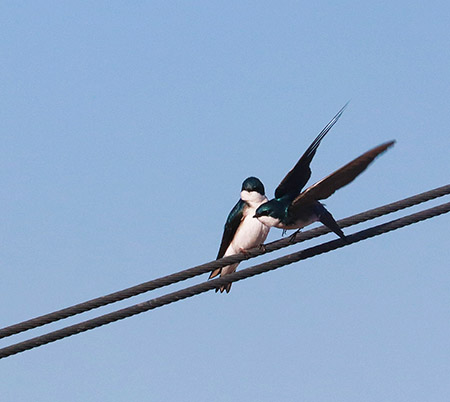 A pair of tree swallows. Photo by Arin Underwood.

Competition from chickadees has been another minor problem. Most of the boxes are taken down in the fall, cleaned, and stored for the winter. Local scouts help put them back up in the spring, sometime before April 20. Wright said if the swallows don’t see the boxes when they begin migrating through the area, they’ll keep going. But chestnut-backed chickadees, which are year-round residents, sometimes find them first and move in.

“Chickadees will have a nest before the swallows arrive and won’t allow them to nest when they show up,” she said. “They’re amazing, they’re fierce. Last year we had three chickadee nests, and a swallow did take over one. That’s the first time a swallow won.”

“We have a Fish and Game permit to open the boxes, and a chickadee can have eight eggs, which is amazing for a little bird like that,” she added. “A swallow clutch is about five. Tree swallow eggs are smaller than your thumbnail.” 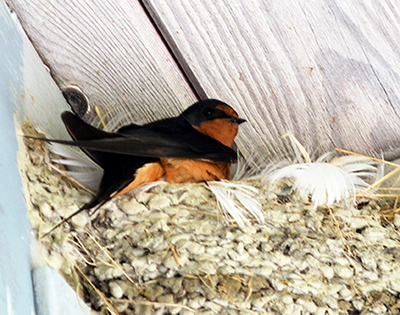 A barn swallow, one of the five species of swallows found in Alaska. These are not cavity nesters.

In recent years success has been excellent. About sixty boxes are out, and Wright said they’ve been getting close to 300 eggs each spring in the boxes. Last year they had 288 eggs laid in 62 boxes, 221 hatched, and 201 chicks fledged.

“2018 was a great year, lots of bugs, and fantastic fledging. But fledging takes a lot of food. If we have a cold June, it’s hard for the birds. That happened last year. And last year a black bear walked over from Douglas (island) and crashed four of our boxes. We went over and put them back up, and one nest survived. It didn’t chew on them, just broke them.”