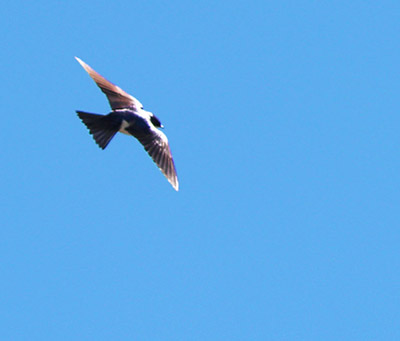 A swallow in flight catches the sun. Photo by Arin Underwood.

There was one small, secluded lake on our list of bird surveys sites I always looked forward to visiting last summer. It had a massive snag leaning out over the water that was riddled with small holes and cavities used by Tree Swallows and Violet-green Swallows.

Because this beautiful old dead tree was home to so many birds, if we stood still on the lake edge we’d be surrounded by lighting-quick blue and green swallows. They spun around us, every so often holding out their snowy white wings to soar overhead, the sunlight making their crowns sparkle blue before they dove down toward the grass, weaving around our boots like we were rocks in a river, matching speeds with their insect prey.

These swallows are among the many species of birds that nest in tree cavities and crevices, often using abandoned woodpecker holes in snags. Leaving these snags standing rather than cutting them down is a good way to support wildlife in your area. In many areas, cavity nesting species find themselves with fewer and fewer nesting options. For this reason, putting up nesting boxes can be a fun and engaging way to support wildlife and learn about your local cavity nesting birds.

A variety of birds large and small will use birdhouses. Do you want to encourage owls to move in? Your box needs to be sturdier and have a larger opening. Want small songbirds such as Red-breasted Nuthatches, chickadees or swallows? The doorway should be much smaller to keep out invasive cavity nesters such as European Starlings. Doing some research beforehand can help you set up your nest box for birds in your area and increase the chances of families moving in. 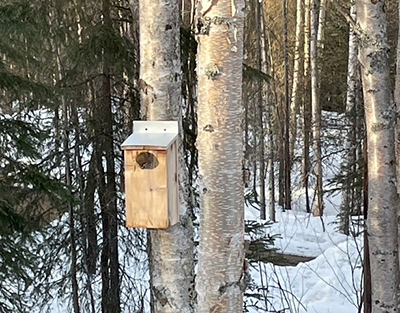 A boreal owl, presumably incubating a clutch of eggs and awaiting her mate's return with food, peeks out of a nest box. Photo courtesy Donna Plisga.

For example, my brother and I live in Anchorage amongst clusters of mountain hemlock. Boreal owls have been spotted in our region (as noted on eBird), and both boreal and saw-whet owls are cavity nesters. If we set up a suitable house and place it correctly (quiet and out of the wind), there is a good chance we will host a family of owls in the next few years! We’ve gotten cedar boards together and are following instructions on proper sizes to make a safe and clean house for local owls. Wood chips in the bottom will help entice the owls inside once we have the box finished and mounted up high in a tree.

Sometimes an unintended but also-welcome visitor moves in. Donna Plisga lives north of Anchorage in Meadow Lake. She built a nest box for a persistent neighborhood woodpecker last year and was pleasantly surprised when a pair of owls moved in a few weeks later instead. Hairy woodpeckers and boreal owls are similar in size, around 10-inches long, so the box is a good fit and opening is appropriately sized. She said she still sees woodpeckers around the neighborhood, visiting a nearby suet feeder. She has owls again this year, perhaps the same pair, she said, or the male with a new mate.

She said she’d hear them calling at night in late winter, then they quieted down. She thinks the female has laid eggs and is incubating, while the male provides food. That was the pattern last year and that’s how it’s playing out this spring. 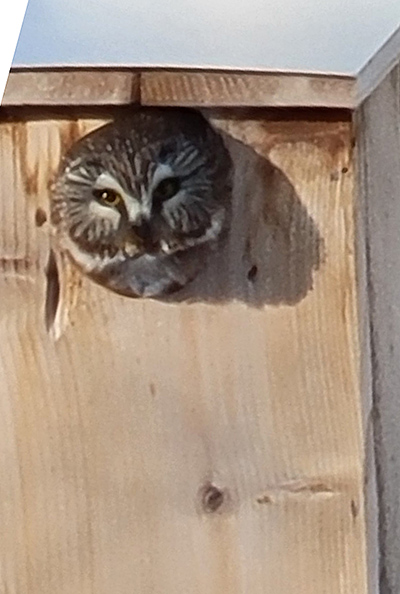 “I don’t see anyone coming and going, just the head looking out the hole, the female I assume, waiting for the male to bring her back something to eat,” she said. “I think they’re very secretive about coming and going.”

She said last year one chick fledged. “I saw the young one, sitting in the entrance hole, lurching forward, but he wouldn’t fly. Something came up and I had to leave for a few minutes, and when I came back he was gone. So, he got out and took off.”

After the owls left, she took the box down the box in July to clean it and upgrade the roof, and she discovered a second owlet. “She had laid two eggs, and both hatched but one died. It was not as big as the one I saw leave, but it was not a baby, it was partly grown.”

Boreal owls are known to be relatively tame around people, and that’s been her experience. “I’ve seen her watching me through the window, and us moving around the house doesn’t bother her in the least.”

She said if people hear owls calling at night, chances are they’ll find a nest box if you build one.

Birds are also not the only cavity nesters in Alaska. Another flying insectivore will make use of a properly designed and offered house, bats.

In mid-April Anchorage’s little brown bats were just beginning to stir in the first hints of spring. Despite the brilliant sunlight that heralds this season, the ice in Potter Marsh was as sturdy as ever and easy to walk across with a 120-pound “rocket box” bat house and the aid of six volunteers. 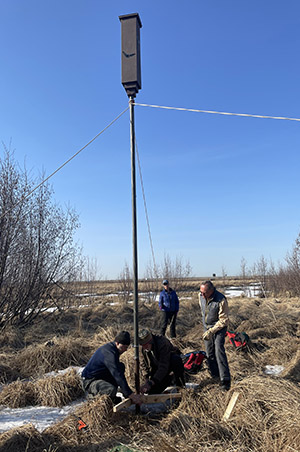 Local nest box expert Mark Findlay had spent three months building this 5-foot-high bat house by hand. It was multi-chambered to allow the bats to move between layers for temperature regulation, painted brown to absorb sunlight (good for bats, but can be dangerous for birds) and camouflage into the background trees, and fixed atop a 15-ft pole to protect the bats from predators and give them enough room to comfortably fly out of the bottom of the box and into the marshland dusk to hunt insects.

It took all six volunteers to raise the bat house with ropes, keeping it upright so it could be bolted down. Now standing tall, the bat house is visible from the board walk, and in a prime wetland habitat for bats.

Bats are an elusive small mammal in Alaska since they can often only be seen past midnight in the summer, swirling through forests and over lakes and streams in search of insects. In fact, a single 8 gram little brown bat can eat its own body weight in insects every night. For this reason, many Alaskans seek to encourage bats to set up roosts or maternity colonies near cabins and homes as a natural bug control. Home owners sometimes discover (usually by hearing) bats living in their walls or attic spaces. While they may be bat friendly, they also may not want bats inside, and bat houses can gently persuade the bats to move out and into a more desirable location while still remaining in the area. 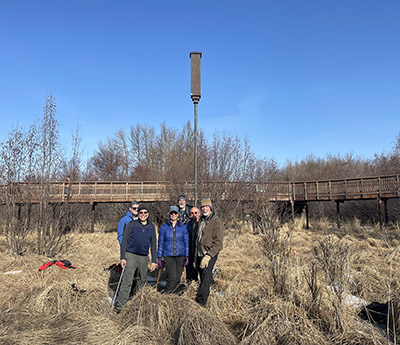 Bats in Alaska behave differently from their east coast counterparts, in that they don’t tend to inhabit caves in large groups. Rather, they gather in small collections under tree bark and in tree stumps, and in rock crevices and cliffs. Sometimes only a bat or two sharing a space for the day. Maternity colonies, on the other hand, are females raising their annual pup and can be much larger, with the pups becoming volant (able to fly) in early July.

Blueprints for successful bat house designs can be found at Bat Conservational International, and bat boxes or houses with their stamp of approval are generally considered good quality.

The Potter Marsh bat house is a rocket box design, which offers multiple chambers for bats to move through and regulate their temperature, retreating to the cooler interior during the heat of the day. Mr. Findlay removed the vents from the design since we have less of a problem of getting too hot for the bats up here and added 1-1.5” holes in the chamber walls so the bats could easier move between them without crawling down the length of the box.

Bat houses can be tricky though and it can often be small details that determine whether bats move in or not. Firstly, bats need proximity to water sources, especially slow-moving streams, or lakes. If you are within 10 km of a water sources, there is a chance bats will move into your bat house. Mr. Findlay also takes note of environmental details for his bat house, having the corners point south so it breaks the wind, installing it on a pole rather than a tree or side of a building so it receives maximum sunlight during the day and some distance from potential predators in the woods, such as owls. 20-30 ft away from trees and other nest boxes should be sufficient. 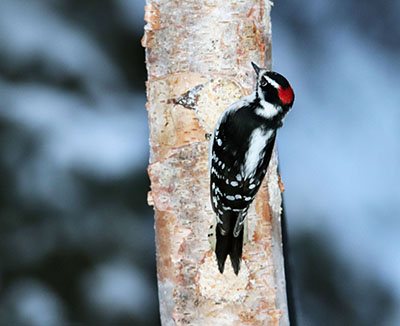 Woodpeckers are well-known cavity nesters and they create cavities. Because they tend to use those nest cavities just a year or two, they are important to other birds who later occupy these holes. Woodpeckers will also use nest boxes. Photo by Katie Christie.

Bats also need enough room to exit their bat house. Bats exit through the bottom of a bat house, dropping down and flying down and up in the dusk. They need at least 10 ft between the bottom of the bat house and the top of vegetation for them to feel comfortable exiting. Color can also have a factor. Mr. Findlay conducted experiments on paint options, measuring the wood temperature in sunlight on plain wood, olive green paint, and brown paint. Plain wood was 62°F, green was 85°F, and brown was 91°F. Dark colors are best to paint bat houses, brown or black will do, it is really a matter of aesthetics. Mr. Findlay prefers dark brown so that the bat house camouflages into the forest better and does not draw attention.

Having bats coexist on your property is mutually beneficial for insect control and roosting. Bats will also not interact with people and are not a danger when left alone. I once had bats swirling through my headlamp beam and taking about as much notice of me as if I were a tree. One bat even flew directly toward me in pursuit of a bug near my face. The bat’s echolocation detected my face a moment before, and the bat made a hair pin turn so sharply away from me that its wing brushed my cheek. 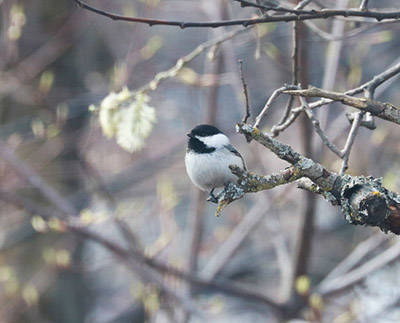 If you build a bat house or bird house, don’t be discouraged if it takes them a few seasons to find it and move in. Perhaps there is a goshawk in the neighborhood, a little too much wind, or a higher woodpecker hole nearby. If you are able, try different sun exposure areas, distance from noise or human traffic, or make sure no paper wasps have set up shop. Perhaps soon, a family of swallows or chickadees will move in and start to build a nest, or a bat will wander into the bat house and decide to raise their one annual pup in the protective walls.

Arin Underwood is a wildlife biologist with ADF&G’s Threatened, Endangered, and Diversity Program. She works with citizen science projects and supports research on birds and small mammals in Southcentral Alaska. Riley Woodford also contributed to this article. Email your address to riley.woodford@alaska.gov for a free copy of The Alaska Owlmanac, a guide to the identification, habits and habitat of ten owl species found in Alaska

Living with Birds: Guide to Building and Placing Birdhouses

To learn what birds live nearby, you can visit sites such as eBird.