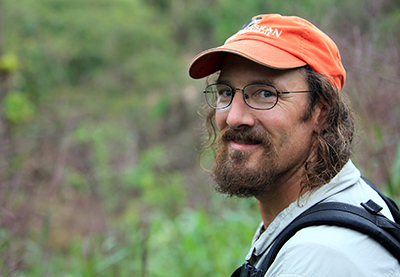 Jeff Jemison’s easy going, good nature was always welcome, whether he was handling bears or bear-watchers, mountain goats or goat hunters. He was happy to see you – if you were a hunter ed student at the Juneau Indoor Shooting Range, where he worked in recent years – or an unsuspecting moose on the Gustavus Forelands, about to be darted and set up with an attractive GPS collar. For two decades Jeff’s enthusiasm, hard work and love of the outdoors were greatly appreciated by his colleagues at Fish and Game, and he will be missed. “I always loved working with Jeff,” has been repeated many times in recent weeks.

Jeff died too young in mid-February, at 57, of a progressive lung disease. He was quiet about the seriousness of his condition and the news was a surprise to many.

Jeff began working at Fish and Game in Juneau and Douglas in 2000. He was a skilled videographer, scuba diver and outdoorsman, but his ability to learn fast and embrace new challenges proved most valuable. He was a keen observer with boundless curiosity about animals and nature. He applied his diving skills to Steller sea lion research, assisting with underwater live-captures of juvenile sea lions. 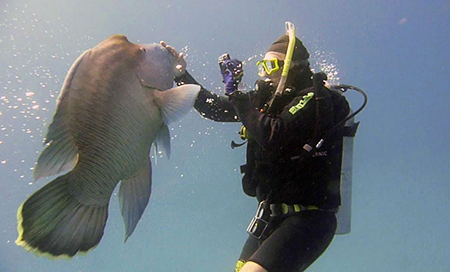 Jeff diving with friends Oksana and Arlo Midgett on the Great Barrier Reef in Australia, with a Maori wrasse. Photo courtesy Arlo Midgett.

Jeff was at home in, on, and around the ocean, said his friend and neighbor Yumi Arimitsu. She wrote, “One of my favorite memories of him is from a beach in Maui, when he spent the afternoon playing in the waves. After he got tired of body surfing he plopped down on his belly to rest just out of the water enough that each wave would wash over him. He stayed there for a long time, facing the waves as they came and went. He had a way of stretching out even the simple things about life he loved most, he experienced them completely and joyfully.”

In 2001 Jeff worked at the Pack Creek Brown Bear Viewing Area south of Juneau on Admiralty Island, home to one of the densest concentration of brown bears in the world. He and his colleagues Chad Rice and Paul Converse kept bears and people safe, fielding questions about the bears' “razor-sharp claws” and “unpredictable nature” (misconceptions). Their camp was on a small island offshore, a quarter-mile kayak paddle from the sanctuary. 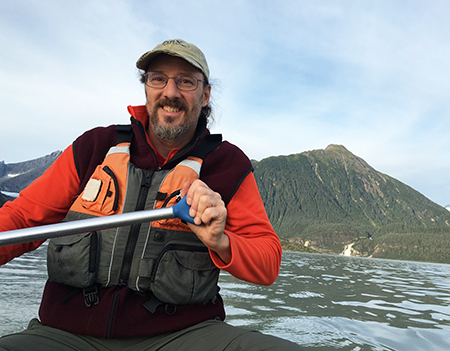 “He was excellent with people, a good communicator, always happy to talk,” Paul Converse said. “He would always see the positive in a situation, and the humor - good attributes when you’re working with the public. We had a lot of fun that summer working out there. He could roll a kayak quite well and quite easily, but he was unable to teach me despite his best efforts. One day he tried, all I can say is we perfected my half-roll.”

“As soon as he got off work he was off exploring places,” Chad Rice said. “He couldn’t sit still. He was always out in the boat, throwing out a crab pot, fishing for halibut. One nice day we had off he and Paul put on a couple old survival suits, gumby suits, and floated around off the island.”

Jeff was able to move between a variety of projects at Fish and Game, which suited him well. He focused on mountain goat and moose projects with biologist Kevin White from 2007 to 2015, all the while helping other researchers, working on marten studies on Kuiu Island, deer monitoring in Yakutat, bat research near Juneau, and using trail cameras to monitor scavengers and predators. 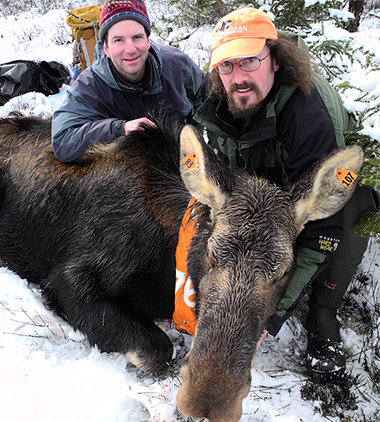 “Jeff was there for the first bear I ever caught and processed on my own,” said Sitka area biologist Steve Bethune. “He was real encouraging and a calming influence.”

Kevin White found Jeff’s sense of humor and positive outlook quite welcome on long, challenging days of terrible weather in the field. Over an eight-year period they simultaneously planned and implemented mountain goat and moose research projects across northern Southeast Alaska. He wrote, “It was very demanding field work that involved extensive preparation and included helicopter and ground-based captures, aerial surveys, mortality investigations, and habitat monitoring among many other things. In many ways, Jeff was the glue that held everything together. Jeff was involved in capturing several hundred mountain goats and moose and was particularly interested in and conscientious about animal welfare.”

Jeff also created opportunities to mentor graduate students in the field and work with school kids in Juneau and Gustavus, giving presentations and leading field trips. An engaging storyteller, he could be nervous when put on the spot, but relaxed and lit up as he recounted an adventure or a wildlife encounter. 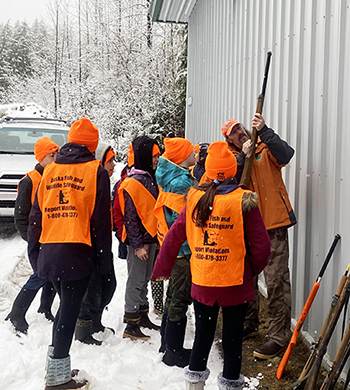 Jeff had close friendships with people in different worlds that sometimes rarely intersected. Friends knew about each other but many had not met. Jeff developed relationships with Tlingit ravenstail and Chilkat blanket weavers, providing them with mountain goat wool collected in the field for use in their amazing, museum quality weaving projects.

An important aspect of mountain goat conservation is the need to reduce the harvest of female mountain goats. Billies and nannies look similar, but it’s the nannies that enable a population to grow, and hunters often can’t tell them apart. Jeff addressed this using the skills of a social scientist. He implemented a hunter interview project focused on understanding why hunters harvest females and how it could be reduced. He was instrumental in developing the mountain goat identification quiz – which has been well received and emulated by several other states. Combined, those efforts have clearly made a significant and positive impact on mountain goat conservation. 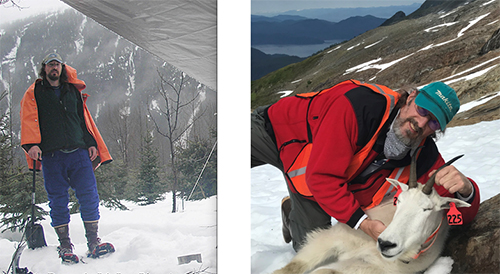 Jeff on the Lace River in 2007, first of many projects with biologist Kevin White; and his last mountain goat capture in 2020, also with Kevin. Photos by Kevin White

Kevin White recalled his first and last days working with Jeff. In the spring of 2007 Southeast Alaska was buried under a massive amount of snow, which persisted into May. Several teams of biologists spent a week in April camping in a remote region of Berners Bay collecting moose habitat data (and finding winter-killed moose).

“During that trip, Jeff, Greg Snedgen and I were camped out in deep snow under tarps and poor weather. We spent our days snowshoeing through willow thickets and measuring browse, yet a memorable highlight was coming back to camp and eating king crab and moose backstrap that Jeff brought along for dinner. Definitely a sign of good things to come. To bookend that, Jeff, Christian Kolden (Temsco helicopter pilot) and I spent an amazing, clear weather day in the alpine capturing mountain goats on Baranof Island in late-July 2020. While it wasn’t evident at the time, we couldn’t have chosen a better day to have spent a last day in the field together.

True to form, Jeff helped with that last goat capture as he was serving as the manager of the Juneau Hunter Education and Shooting Complex, a position he began in 2015. An avid archer, trap shooter and hunter, Jeff managed range operations and became known to many in Southeast Alaska as a leader in Hunter Education, supplying materials to outlying community instructors. His friend Mark Stopha, a volunteer hunter education instructor said, “Locally, Jeff was best known to the many sixth graders in the Juneau school district he patiently mentored during their hunter education classes. Jeff loved kids and loved teaching them about wildlife and hunting.” 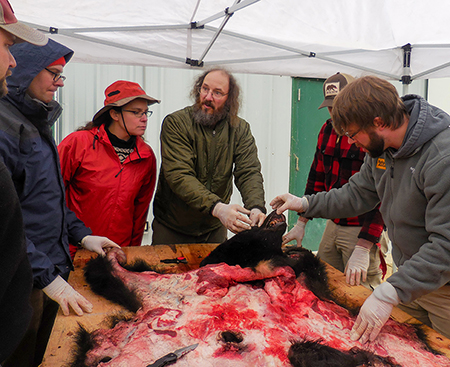 Stopha hunts and traps but was never much for bear hunting – until he met Jeff. He said, “He loved black bear hunting and loved processing, canning and eating black bear. I didn’t know much about bear hunting, and Jeff was so excited about it I thought I’d better take him up on his offer to show me the ropes.” They had a memorable and successful trip in June of 2020.

Jeff ‘s appreciation for wild game was huge. He loved to cook and was a go-to recipe consultant just a phone call away. Even better, he loved to share, dropping off a king crab leg, jar of bear meat, or “just” a pristine slab of salmon. 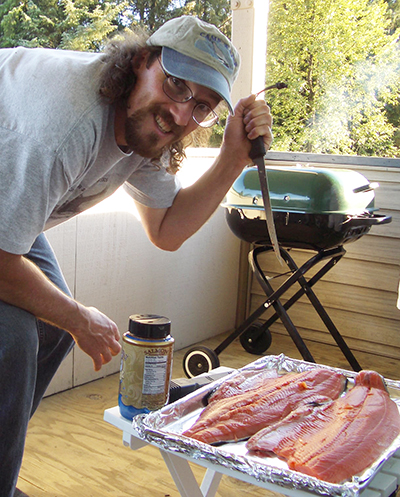 “Jeff had a true love and zest for food, especially wild game and fish. He had a way of describing a given meal that made you hungry,” said Tom Gage, who runs boats for Fish and Game and works on marine mammal research projects. “His enthusiasm was contagious. He never missed a chance to have fun. After one particularly long day, he convinced me that I just had to hike up to the hot spring - even as dark approached. It was, of course, worth the trek; one I wouldn’t have done without his goading.”

His close friends Mike Taras and Neil Barten talked recently, and they agreed, Mike wrote, that Jeff lived more life in one day than most people do in a week or even a month. “He really went after it. Sometimes it was too much, impossible to keep up with him. It wasn’t until he got sick that I could even come close. So, in some ways he lived a very full life even though it was cut short in years.”