Hanging on by a Thread
The Great Alaska Loon Rescue 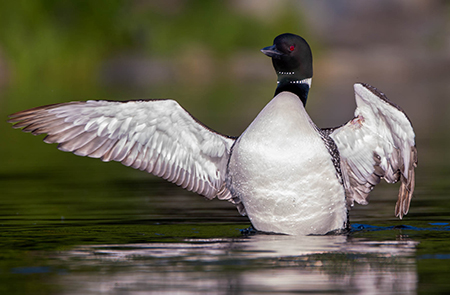 The loon in question. A reddish area can be seen on the "elbow" of the left wing (on the right since it's facing the camera) where line is tangled in the wing. Photo by Michael Bay.

It was a cool August morning in Anchorage when residents of DeLong Lake noticed something odd. A Common Loon was swimming around the lake as normal, but it was being trailed by a strange orange bobber. Reports started to roll in from the public, and Tyler Lewis of the Alaska Department of Fish and Game Waterfowl program and Michael Bay of the Bird Treatment and Learning Center visited the lake to investigate.

There was indeed an adult Common Loon swimming about the lake with its mate, a common site on Anchorage’s lakes in the summer and fall. But closer inspection via spotting scope revealed that it was entangled in fishing line, with an orange bobber trailing after it. Even worse, the loon’s wing was also tangled. Loons often rear up on their legs to flap their wings and stretch, but when this loon attempted this casual behavior, its left wing was unable to fully extend. This meant the loon would be unable to fly.

It is unfortunately too common for wild birds to become tangled in abandoned fishing line. The Bird TLC sees many birds injured or even killed every year by becoming entangled in monofilament line and metal fishing hooks. Likewise, the Alaska Dept of Fish and Game gets dozens of calls annually from residents about waterfowl tangled in fishing line on local lakes. Proper disposal and cleaning up any fishing gear debris you see in wetlands, lakes, and rivers can help protect waterbirds from this threat. 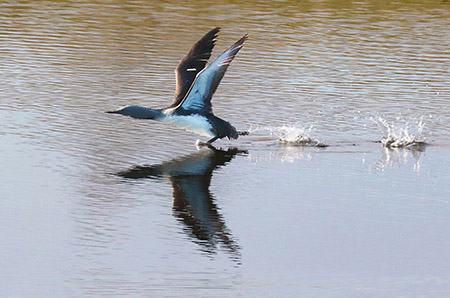 A red-throated loon runs across the water, in characteristic loon take-off fashion. Loons are strong flyers once they get airborne. They are incredibly maneuverable swimmers underwater. Photo by Arin Underwood.

After several days of observation, the DeLong Lake loon lost the orange bobber that first drew attention, making it appear as a normal loon swimming about the lake and diving for food. But Lewis and Bay could see that its wing mobility was still impaired. They would need to catch the loon and cut off the line for it to have any chance of surviving the winter.

Common Loons are beautiful, easily recognizable birds found in much of Alaska. Breeding adults sport deep black plumage with white speckles and stripes, an iridescent green throat, and bright red eyes. Found across most of North America, Common Loons can live to be 35 years old. They breed in Canadian and Alaskan lakes and move to the coasts for winter. A diving specialist, Common Loons are so well adapted to life on the water that they have difficulty walking on land. To be efficient divers, their legs are situated far back on their bodies, making it difficult to hold themselves up out of water. They take to the air in the fashion of a float plane taking off, running across the surface of a lake while building up enough momentum to become airborne.

It is this diving specialty that perhaps ensured the DeLong Lake loon survived as long as it did. While it could not fly, the loon could still swim and dive, and feed itself on the plentiful fish population. But time was running out as temperatures dropped and lake freeze-up loomed. The easy food access ensured the loon could survive until then, all the while avoiding and aggravating Lewis and Bay as they went to every effort to save its life. 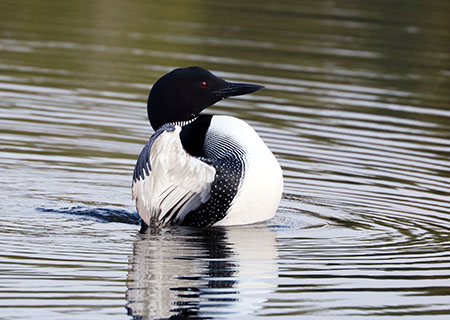 Over the next three months, Lewis and Bay tried several methods for catching the loon. They attempted a night-light capture first, visiting DeLong Lake at night and trying to disorient the loon with a spotlight so they could catch it. While this is a common method of loon capture, this particular loon was nowhere to be found during these nighttime attempts. The “loon just goes into a secretive mode, really wary of the boat and the light…it didn’t allow itself to be seen,” said Lewis.

Next, they tried catching it in the daytime with a net-launching rocket gun; attempting to paddle a canoe close enough to the loon to shoot a net over it. But again, they were thwarted as the loon cautiously avoided them. Over the following weeks they went out again and again in canoes and kayaks, day and night, trying to get close enough to the loon to capture it and untangle its wing before migration season came and the other loons left for the coast. But by this time the loon recognized Lewis and Bay and would watch them approach suspiciously with its bold red eyes. Then it would dive away before they got close and make itself scarce for the rest of the day, seemingly avoiding them more than any other lake visitors. 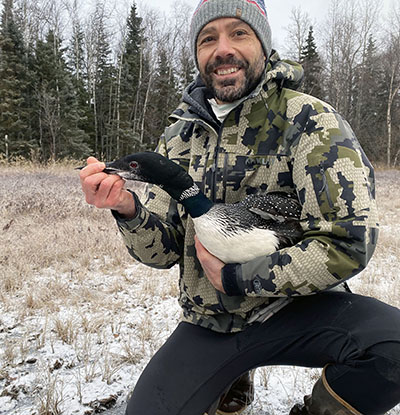 As August turned to September and then to October, Lewis and Bay began to give up hope of ever helping the loon, it was too stubborn and uncatchable.

“We had kind of given up,” said Lewis, “they’re a tough bird to catch.”

Then the loon’s mate, who had stuck with its entangled partner as long as it could, finally migrated away along with many of the other waterbird residents of DeLong Lake. The trapped loon was all alone on the lake, left behind as winter approached, and staring shadily at the biologist and the bird rescuer who stood on the bank trying to come up with a new plan to save its life before winter froze the lake and cut off its food supply.

It was a Monday morning in early November when calls again came in from worried residents of DeLong Lake to Michael Bay. The temperature had dropped overnight, and the lake was almost completely frozen over. The loon’s access to food would be gone within a few short days.

Tyler Lewis and fellow waterfowl biologist Michael Guttery from ADF&G, rushed to the lake to find a 10’x10’ opening in the ice right next to shore, with the loon paddling back and forth. This time, the lake was frozen, and the loon had nowhere to go. If it dove away from the opening then it would be trapped under the ice, a mistake it was too smart to make. 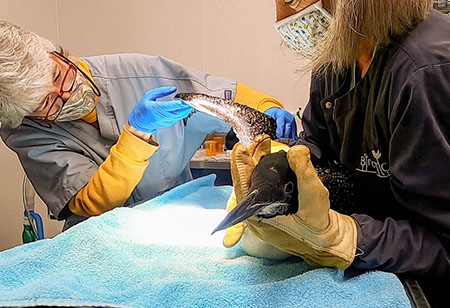 Bird TLC veterinarian Dr. Karen Higgs examines the loon. She determined it had some muscle atrophy from not being able to use its left wing, some torn feathers and a few abrasions from the line, but there was no permanent damage. Michael Bay photo.

So, it could only stare in irritation as the biologists tried one last time to catch it. They tried dipnets and the rocket gun once more before finally throwing a gill net into the opening in the ice. And then the loon “pretty promptly just swam into the net,” said Lewis. Within a minute, it dove right in, was pulled ashore, and was safely in its rescuer’s arms after three months of constant and fruitless efforts.

Despite this, “I thought it would be doomed,” said Michael Bay, “It had been tangled in line for three months.” They found a rusted metal hook trailing the bird but not embedded and monofilament line wrapped hopelessly around the loon’s leg, its primary wing feathers, and shoulder joint. But when they carefully cut the line away, they found only minor abrasions and no sign of infection. The loon was taken to Bird TLC. The Center vet, Dr. Karen Higgs, determined that the loon had some muscle atrophy from not being able to use its left wing, its feathers were torn and scraggly, and it had a few abrasions from the line that had started to heal around it. But miraculously, there was no permanent damage. 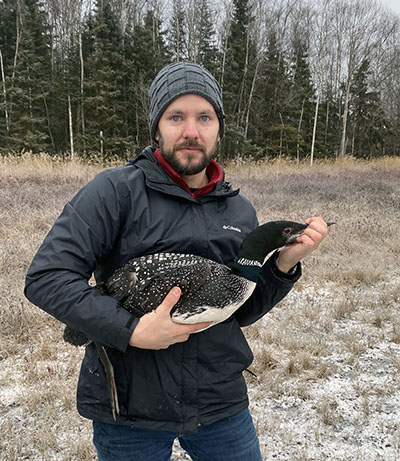 “Loons don’t do well in captivity,” explained Bay, they are high stress and need to dive for fish themselves or they won’t eat. Keeping the loon at the Bird TLC for too long could lead to its death just as certainly as the frozen lake. It was determined that since the loon had sustained no permanent damage, its best chance at survival was to be released as soon as possible in a location where it could dive for fish and slowly build back its flying muscles.

Michael Bay himself drove the freshly banded loon to Resurrection Bay in Seward. He opened the kennel door by the water and the loon rushed right out and into the ocean. There were already other loons in the bay, the water will remain open all winter, and the loon had been given the best fighting chance possible. The loon paddled effortlessly out to join the other waterbirds, probably relieved to see the last of Lewis and Bay.

Loons are site loyal and typically monogamous. There is a good chance that the rescued loon, now sporting a uniquely identifying band on its right leg, will return to the well-stocked DeLong Lake next year, as well as its mate. The great loon rescue was “definitely a community effort,” said Michael, who relied on the frequent reports from residents of DeLong Lake as to how the loon was doing and where it was going. Even if it does not return to DeLong Lake next summer, it may return to another lake nearby, perhaps seeking one less crowded with fishermen and bird rescuers in canoes. 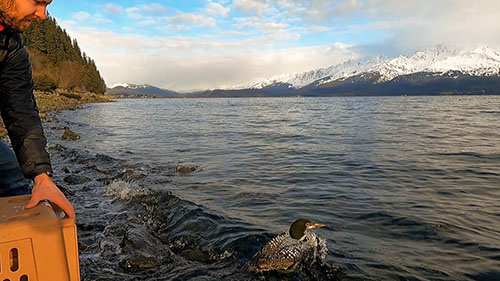 The loon is released in Resurrection Bay near Seward.

Support citizen science and the Threatened, Endangered, and Diversity (TED) Program, by purchasing a Conservation stamp!