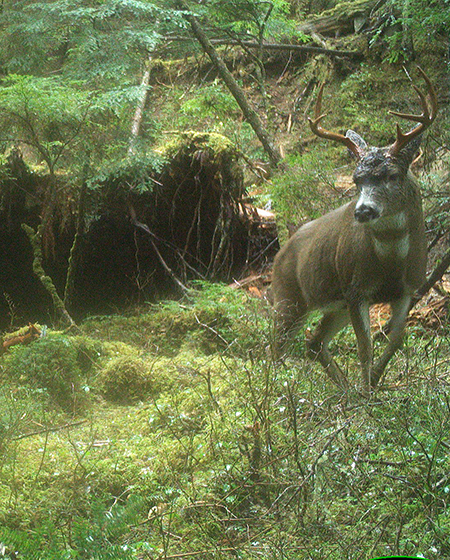 Scientists now have a new — and improved — model for predicting winter habitat use by Sitka black-tailed deer on Prince of Wales Island, laying the groundwork for wildlife management, habitat restoration efforts, and applications for future use in other areas of Southeast Alaska’s rainforest.

The new method, which uses remote light detection and ranging (known as LiDAR) data predicts winter deer habitat selection with 94 percent accuracy, an increase of 10 percent over other methods. LiDAR data is a remote sensing method that uses light in the form of a pulsed laser to measure variable distances to the Earth. According to the National Oceanic and Atmospheric Administration, these light pulses — combined with other data recorded by the airborne system aboard an airplane or helicopter — generate precise, three-dimensional information about the shape of the Earth and its surface characteristics, in this case the Tongass National Forest on Prince of Wales Island (POW).

In the peer-reviewed article published in the November 2021 issue of Forest Ecology and Management, scientists combined high-resolution GPS relocation data from deer collared on Prince of Wales in 2010 – 2012 with airborne LiDAR data, collected by the U.S. Forest Service in summer 2017, to test a machine learning algorithm called Random Forest. The algorithm analyzes variations in data to predict what kind of habitat deer select in winter. The group – made up of Colin Shanley and Conor Reynolds, with The Nature Conservancy, Dan Eacker, with the Alaska Department of Fish and Game, Bonnie Bennetsen, with the USDA Forest Service, and Sophie Gilbert, with the University of Idaho — wanted to know what type of habitat animals chose compared to what was available on the landscape. The LiDAR data, with its three-dimensional structure of the forest, gave the scientists the ability to examine this. The results show that the Random Forest model can determine the habitat deer use with greater accuracy than past methods. 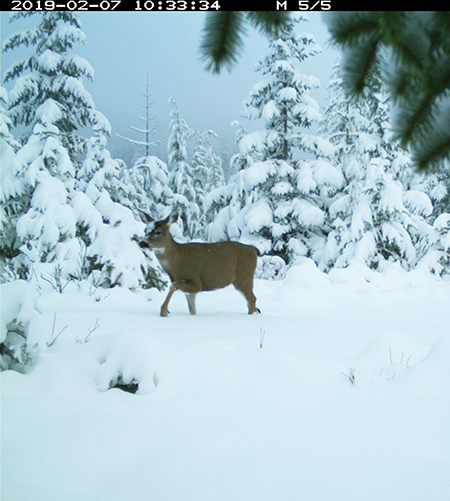 “Past habitat selection studies have not been overly informative because it’s a coarse way to look at the landscape when you have habitat polygons, for example, that say ‘this entire stand falls into medium old growth category,’” said Eacker, who studies deer in Southeast Alaska. “But if you’ve ever spent any time in the rainforests of Southeast, it’s easy to see there is huge variety from one area to another and it doesn’t make sense to generalize a square mile with a single description. But LiDAR can capture the habitat variation with high levels of accuracy at a much finer scale.”

A point cloud image of the forest - cross section.

A LiDAR instrument principally consists of a laser, a scanner, and a specialized GPS receiver. Airplanes and helicopters are the most common platforms for acquiring LiDAR data over broad areas. Two types of lidar are topographic, which was used on POW, and bathymetric. Topographic LiDAR typically uses a near-infrared laser to map the land, while bathymetric LiDAR uses water-penetrating green light to also measure seafloor and riverbed elevations. Data is acquired by shooting a dense projection of lasers down to the ground and recording the amount of time they take to get back to the senser. These lasers sending back multiple data points are called a point cloud. Through that point cloud a three-dimensional structure of the forest is created. Within that structure and point cloud, scientists pull out variables like canopy coarseness and tree heights, to name a few.

“This is the highest resolution LiDAR data that has been collected in the forest. It’s only available for some areas, right now mainly Prince of Wales Island,” Eacker said. “[The U.S. Forest Service collected] it there because that’s where much of the timber harvest has happened and the second growth is at a place where it could benefit from thinning and restoration to improve deer habitat.” 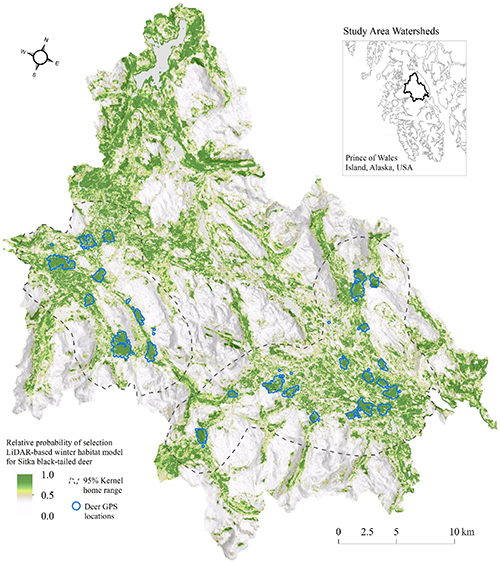 A map of Prince of Wales Island in southern Southeast Alaska, showing relative probability for deer habitat use.

In a dense forest, little light reaches the forest floor, resulting in less food for deer. So, the data was acquired to help identify areas that might benefit from thinning trees out in the forest. But agencies aren’t using LiDAR for this singular purpose; they are also using it for general understanding of any forest – what is the volume of timber in an area? What is the forest structure like? There is a general movement towards LiDAR, said Eacker.

Biologists can predict what types of habitat deer in Southeast will use, and when they will use it. They know, for instance, winter snow at high elevation will push deer to lower elevations, or to areas with thicker canopy cover where snow has not covered the little food still available. Based on GPS data acquired from collared deer, biologists have also found, for instance, that some deer have small home ranges that may only encompass less than a half square mile. Other deer have broader ranges, moving from summer range in the alpine to lower elevations in winter.

Winter is a key time for Sitka black-tailed deer. Harsh, persistent winters, for instance, make food availability scarce and can cause die-off due to starvation. On the flip side, mild winters will do the opposite, allowing for greater deer survival; there is simply more food available, and it is easier to find. Those factors are out of the hands of wildlife managers. But they do manage harvest, and that can be significant in places like POW with extensive road networks and good access for hunters. This new modeling tool will help identify habitat deer could likely use during winter months. Equally important is making sure that habitat stays in quality condition. Other agencies, such as the USFS, will be able to use this model to help pinpoint habitat restoration priorities, which can be costly and challenging to staff.

Years in the Making 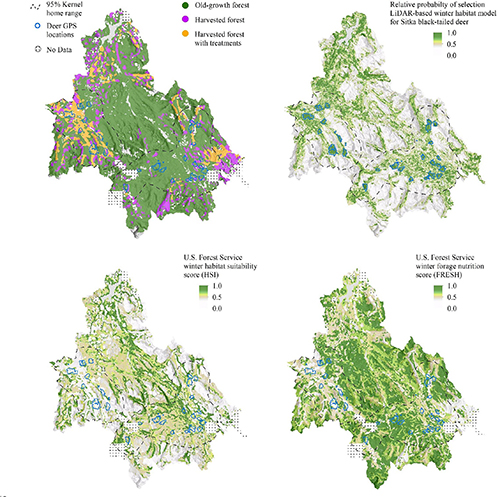 The newly published paper in Forest Ecology and Management was an achievement. The review and a “stamp of approval” by experts and peer scientists shows the new approach passes the test of scientific rigor. The article went through a couple years of editing and Eacker said it was a true collaborative effort. The published piece clearly explains the use of the Random Forest model and the justification for it. Because of the detail of LiDAR data, Eacker said the results are not a huge surprise, but the fact they could use this relatively new model to achieve greater accuracy than other more traditional models is a technological step forward. These findings are important for deer conservation and management in the future and for habitat restoration planning down the road, he said. 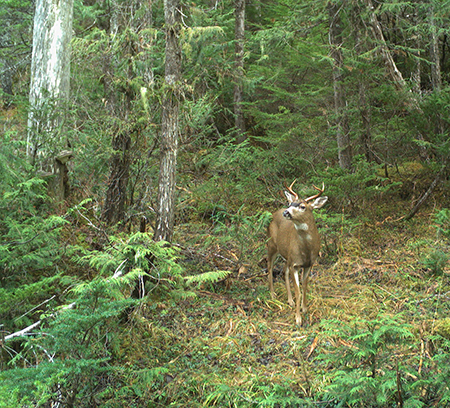 On Chichagof Island, for example, ADF&G has GPS data for collared deer on the island. As more LiDAR data becomes available this method could absolutely be used again.

“The methodology is all laid out in this paper,” Eacker said. “You know, how to go about taking that GPS data and using those particular methods to build that model.”

But it doesn’t have to stop with deer, he said.

“Thinking past deer, we have all these species … thinking about all the wildlife of the Tongass … other animals that use the forest that other biologists are studying … they are also limited by those same habitat variables.”

For now, plans to acquire LiDAR data for other parts of Southeast Alaska are not at all concrete. The process is expensive, but Eacker said talks are in the works on ways stakeholder agencies could collaborate to help share the cost of acquiring the valuable data.