The number of hunters in Alaska is in steep decline, according to a survey released last year by the U.S. Fish and Wildlife Service. There's just one problem – it's not true.

The report, “2006 National Survey of Fishing, Hunting and Wildlife-Associated Recreation: Alaska,” released in May 2008, compared hunters in Alaska in 2006 to hunters in 2001 and reported 26 percent fewer hunters. The 81-page report contains a lot of information, but that detail was highlighted in the news, triggering ...   Alaska Hunters ArticleContinued

The Evolution of an Angler, Part II

April finds many Juneau anglers chipping ice in driveways to get to their boats and salivating at the thought of that first king salmon on the grill. I chip and shovel my way into the shop to check on the baby (17' Alumaweld) and I'm horrified to see what a mess I left last fall - grease gun, fogging oil, electrical grease left out to freeze & thaw all winter, tools strewn about, dirty rags left on the boat. Looks like I need an end of season checklist.

Fortunately I did take care of ...   Learning to Fish ArticleContinued

Q: If a person touches a bird's nest, a baby bird or another baby animal, will that cause the adults to abandon their young because of human scent?

A: This is essentially a myth, but one that no doubt started to help prevent people from disturbing wildlife. According to a 2007 article in Scientific American, this prevalent belief that the scent of humans leads to nest abandonment is “for the birds” and denies basic bird biology and “animal parents' innate drive to nurture their broods.” ...   Ask A Biologist ArticleContinued

The Fairbanks Experimental Fish Hatchery is a small scale, state-of-the-art facility near downtown Fairbanks. The hatchery began operation in 2004, pioneering and testing some innovative techniques and equipment designs, including new approaches to water treatment and fish rearing. The facility has had remarkable success raising traditionally hard-to-culture fish such as Arctic grayling, and has served as a pilot facility for design of the Ruth Burnett Sport Fish Hatchery (RBSFH), currently under ...   Innovative Hatchery ArticleContinued

Plants and animals introduced to new environments can cause serious problems, ranging from damage to the environment and infrastructure, loss of recreational activities, and health concerns. Some invasive species ...   Anglers and Snails ArticleContinued 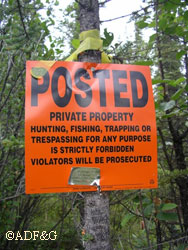 Recently two hunters were driving along a major highway in Alaska, looking for a place to hunt, and noticed many new “No Trespassing” signs. These longtime Alaskans did not want to trespass on private property but they did want to do a little hunting, and they had hunted this area before. They couldn't find a trailhead or a designated trail along the highway; only “No Trespassing” signs.