Volunteering on a Seal Capture Trip
My First Pair of Xtratuffs

Upon boarding the M/V Steller I was promptly informed to be careful of the seals.

"They'll telescope," warned the skipper, Dan. "Just remember their head can move two feet away from where it is now to bite you – and their body won't even move."

By a circuitous series of events, I found myself invited on a seal capture trip as a volunteer, recording data for Alaska Department of Fish and Game scientists. We'd all be living and working aboard a research vessel ...   Seal Capture Trip ArticleContinued

Gathering Data on Harbor Seals in Endicott Arm
The Equipment

By Amy Carroll and Gail Blundell 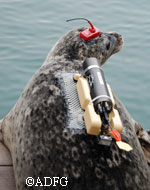 The harbor seal population decline in Glacier Bay has scientists concerned---numbers have been declining at a rate of more than 14 percent per year since 1992. This has continued despite strict regulation of vessel traffic, a suspected stressor.

The harbor seal research program, led by Alaska Department of Fish and Game's Dr. Gail Blundell, has been collaborating with other agencies to gather data on harbor seal populations.

“It's really not unusual for a cow to walk off and leave her calf,” said state wildlife biologist Rick Sinnott. “They don't necessarily hang out with the cow at all times, especially when ...   Leave Calves Alone ArticleContinued

In 2005, a group of Alaska Department of Fish & Game employees gathered in Fairbanks to plan for and embark upon a journey that would involve hunting, shooting, fishing, wilderness survival, numerous challenges, and – oh yeah – a lot of fun. The experience, in many cases, profoundly changed lives, and is called the Alaska Conservation Camp.

“Please don’t let me get a king, Please don’t let me get a king…” That was the silent mantra echoing through my head each time I forced the dip net into the deep swirling hole on the Copper River. I knew if a 30-pound king (Chinook salmon) hit my net, chances were good I was on the losing side of the pole. Although my dip net partner and fellow Fish ‘n Gamer, Kelly Mansfield and I were tied off to a gnarled tree jutting from the canyon’s near-vertical ...   Dipnet Fishing Article Continued

Alaska is home to singing seals, shrimp that change their sex, polygamous phalaropes and air-breathing fish. These odd creatures – as well as all the familiar Alaska animals – are included in the new Alaska Wildlife Notebook Series.

The Wildlife Notebook Series has long been one of the Alaska Department of Fish and Game's most popular publications. This winter, the book was updated, revised and reprinted, and the new edition features about 20 new species. The 300 page book includes about ...   Wildlife Notebook ArticleContinued