The bears escaped - as planned, without even noticing they'd been snared - but they left woolly brown hair in the traps. Like a burglar leaving his driver's license at the scene of a crime, that hair tells biologists exactly who was there. Alaska Department of Fish ...   Snaring DNA ArticleContinued 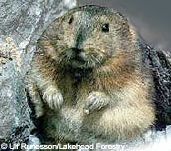 Lemmings are a kind of short tailed vole, a mouse-like rodent that favors tundra and open grasslands. Three kinds are found in Alaska, including the collared ...   Lemming Myth ArticleContinued 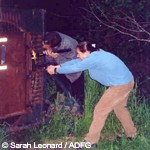 Jessie came to the department with ...   Biologists at Work ArticleContinued

Marmots are designed for cold, with thick fur and ample body fat. They can't sweat or pant to dispel excess body heat, so they avoid overheating on summer afternoons by retreating to the cool, mosquito-free darkness of their burrows, ...   Ice Age Marmots ArticleContinued