The group of four bears included a sow and three cubs. One cub is distinctly more ‘normal' looking. White guessed the cubs are all about a year old – probably born last spring.

“The purpose of the ...   Saving Moose Habitat ArticleContinued

Suddenly, 9-year-old Hunter yells to his 11-year-old older brother Clem to come look at a couple of crabs he found under a log. Hunter didn't recognize the crabs as anything that he or Clem had seen ...   New Crab Discovered ArticleContinued

Ben Grussendorf is a longtime member of the Alaska Board of Game, the state authority that passes regulations regarding Alaska's ...   Ben Grussendorf ArticleContinued 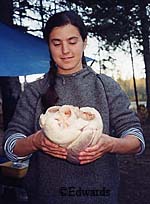 Credit for this recipe is due to my mother, Diana Edwards, who taught me how to make this.


Preparing the heart:
When the heart is still fresh, soak it in a bucket of cold sea water or fresh water to flush out the blood. Rinse well. Trim the fat and the tops of the valves off well so that the final product is mostly red and the top is relatively level, with clear access to the chambers of the heart. At this point, the heart can be kept in the freezer if wrapped well in saran wrap ...   Stuffed Moose Heart ArticleContinued