A Crisis in the Making in Northwest Alaska;
Caribou, Hunting Pressure and Conflicting Values

A yearly problem is about to unfold again in Game Management Unit 23; the Kotzebue region of northwestern Alaska. And the hunting and wilderness experience of a variety of user groups hangs in the balance.

Broadly, the problem is about what happens when different perspectives on hunting collide and access to wilderness, wildlife, and hunting opportunity is insufficient to meet everyone's needs. More specifically, it is about the increasing number of guides, transporters and visiting hunters ...   Caribou Crisis ArticleContinued

I scan the shoreline through binoculars as we cruise the perimeter of the rocky island. We hear the familiar loud, piping alarm call before spotting a lone black oystercatcher perched conspicuously atop a rock. The sentinel, having sounded the alarm, quickly leaves its perch to lure us away. Somewhere nearby we are sure to find its mate, most likely sitting atop a nest.

Camping gear that many folks consider essential is problematic for airline travelers and requires special handling. Some items are off-limits completely. Getting to remote areas often requires a small charter plane, and the rules are different from commercial airline policies. It's ...   Flying with Gear ArticleContinued

The camp stove is an essential piece of gear for hunters, backpackers, rafters – virtually anyone spending the night outdoors. But chances are good that a Transportation Safety Officer will confiscate your stove at the airport. It's not illegal to fly with a stove, but it's tricky.

Scott Rader, the camping department manager at REI in Anchorage, is quite familiar with the issue. He's outfitted customers with new stoves because they've had theirs confiscated en route. He said travelers with ...   Flying Stoves ArticleContinued

Was that a Bear or a Moose?
Examining the Evidence

Every spring and summer, Jessy Coltrane braces herself for the poop calls.

Some agitated callers want Coltrane, the Alaska Department of Fish and Game assistant area biologist for Anchorage, to come out and take a look. They are certain a bear created the big plop in their yard or near their house.

Coltrane, whose work focuses largely on urban wildlife management, has learned to begin conversations by tactfully asking: “Did you realize that moose poop sometimes looks like a wet ...   Bear or Moose? ArticleContinued

Bears are arguably among the most intriguing and captivating of Alaska's wildlife. Each year thousands of people, locals and visitors alike, seek out bears to view, photograph or harvest. Many visitors to Alaska consider seeing a bear to be among the highlights of their trip. Countless photos exist of bears moving and feeding in their natural habitats; in sedge meadows along beaches in the spring and along salmon-filled streams in the fall. These images constitute positive reflections of the ...   Living With Bears ArticleContinued 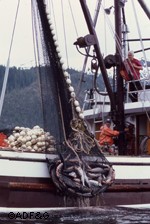 The recipe came to our attention at Alaska Wildlife News when Elaina Spraker was selected as a finalist in the Second Annual “Fish Alaska Reader Recipe Contest.” Spraker was one of four who participated in a cook off at the Kincaid Grill in Anchorage. A shrimp salad took the competition, and the other finalists prepared recipes for salmon and for halibut.

“The cook-off was a great experience. I'm not quite sure I like cooking in a competition. I'd much rather pop a bottle of wine and ...   Honeymoon Salmon ArticleContinued