Residents of Gustavus, a small southeast Alaska town located just outside Glacier Bay National Park, remember the first time a moose was seen in the area, around 1966. The moose population has boomed since those first moose colonists arrived, and in recent winters, seeing moose in and around town is a daily experience for Gustavus locals. Between April and September, however, moose sightings become much less ...   Moose Migrations ArticleContinued

Biologists investigating a decline in Dall sheep in Interior Alaska suspected coyotes might be playing a role. Their research has revealed some surprises about the opportunistic Alaska coyote and its interactions with other predators and prey.

By the mid 1990s, numbers of Dall sheep in the Central Alaska Range and the Yukon dropped to about half of what they had been a decade earlier. Hunters and wildlife managers were concerned. To understand the causes for the decline, biologists needed ...   Coyotes in Alaska ArticleContinued

Recent studies have revealed some surprises about one of Alaska's most formidable ocean predators, the salmon shark.

Imagine going fishing with little more than a shovel—no hooks, no lines, no nets—and being able to catch enough fish to keep you well-supplied for the winter.

That's the way it is with fall fishing for whitefish in the coastal lagoons near Kotzebue, a community just above the Arctic Circle about 500 miles northwest of Anchorage. Here, near Cape Krusenstern, Iñupiaq families dig ditches in beach gravel to catch whitefish trapped in a lagoon with no outlet. It is an old tradition, one ...   Arctic Whitefish ArticleContinued

Tracking Royalty in the Kuskokwim River

Some special salmon will be swimming up the Kuskokwim River this summer – salmon implanted with tiny radio transmitters, instruments that are doubling as “lottery tickets.” Folks catching these fish will be rewarded with more than fresh salmon fillets.

The summer of 2005 is the fourth season for an Alaska Department of Fish and Game (ADF&G) study of Chinook (king) salmon in the Kuskokwim River. The project uses radiotelemetry techniques to estimate abundance of king salmon above the Aniak ...   Tagged Salmon ArticleContinued

By Sarah A. Gilbertson 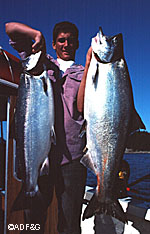 If you've ever fished on a lake in Southcentral or Interior Alaska or in Ship Creek in Anchorage, there is a very good chance that you've caught a fish stocked by the Alaska Department of Fish and Game and produced at one of our sport fish hatcheries. Remember the thrill of pulling in that “big one?” As of a few weeks ago, the opportunity to catch that “big one” was in jeopardy. But recent action taken by the Alaska State Legislature will ensure that such sport fishing opportunities are available ...   Hatchery Enhancement ArticleContinued