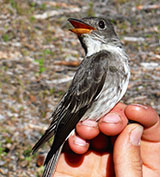 In my two months of birdwatching in wetlands around Anchorage last summer, I never actually saw one of Alaska’s most unassuming songbirds, the Olive-sided Flycatcher. Their gray and olive plumage camouflages them well in their evergreen environment and I found myself scanning the scraggly treetops in vain for the little perching bird. That isn’t to say they weren’t there, though; I heard their trademark call of “Quick! Three beers!” quite often ...   Tracking Flycatchers Article Continued

Along the west side of Cook Inlet at the base of the Alaska Peninsula, the world’s largest concentration of brown bears gathers each summer at the McNeil River State Game Sanctuary to feast on salmon returning to their natal streams. To protect bears and their habitats while allowing the public to observe this unique spectacle, the Alaska Department of Fish and Game manages a guided bear viewing program at the sanctuary. Accompanied by ADF&G sanctuary managers, groups ...   Wildlife Viewing Article Continued

As we saw last month, the road to understanding how to best categorize the brown bears of Alaska has not been straightforward. From Lewis and Clark’s “discovery” of the “grizzly” to C. Hart Merriam’s assertion that over 70 unique species of brown bear inhabited North America, the path to taxonomic clarity has been full of twists, bumps, and occasional U-turns. By the late 20th century, however, there was unanimous agreement with Robert Rausch’s assertion ...   Grizzly - Brown Bear Article Continued