For those of you that love dogs, love the backcountry of Alaska, and want to read some uplifting news for a change - hopefully you’ll enjoy this article. This is a story of the power of like-minded people coming together to accomplish a shared goal for the good of our shared wildlife resources.

I have the privilege of working with ADF&G’s Statewide Small Game Program. About six years ago my colleague in Fairbanks and I initiated a project we learned about from a Norwegian ...   Brood Surveys Article Continued

Muskox on the Seward Peninsula
Near Extinction, Recovery and Sharing the Tundra

Last month we looked at current muskox research in Alaska. Now we’ll look at where they came from and how we got to where we are today.

In 1970, the University of Alaska published the Inupiat Eskimo Dictionary. Muskox are listed under “Creatures.” Not as “Land Animals,” but as “Animals of History and Legend.” Uminmak (muskox) shares the category with kiligvak (mastodon).

That same year, muskox were introduced ...   Muskox on the Seward Article Continued 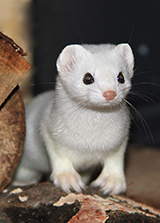 I think my first encounter with a weasel, in Alaska, was in Hatcher Pass one summer. Of course, I knew of weasels from having grown up in the UK. I remembered reading in Roald Dahl’s Boy something about how female weasels will ferociously and fearlessly defend their young. They got a bit of a bad rap in the Redwall book series, where they were generally featured as villains. They seem to have a bit of a bad reputation generally, really; unsavoury characters in books and ...   Alaska’s weasels Article Continued