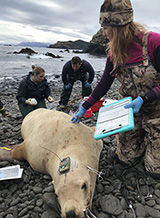 Seven female Steller sea lions tagged in October 2019 have revealed insights into sea lion foraging in the Gulf of Alaska. The sea lions, all mothers with a pup and some also pregnant, were captured near Kodiak Island and equipped with remarkable devices that provide an unprecedented suite of information for sea lion researchers.