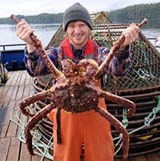 King crab are an Alaska icon. They are delicious as well, and insuring they are available for harvest requires careful management. Biologists who oversee king crab in Southeast Alaska waters monitor the big, spiny crabs - and the Alaskans who catch them as well.

“People might have a potful of crabs and think that they’re everywhere, but it takes a long time to grow one of those things,” said shellfish research biologist Adam Messmer, who is based in Douglas and serves ...   King Crab Article Continued

Several miles downstream of the Kenai-Russian River confluence, I stepped off the one-man pontoon raft Danny Z. had loaned me and pulled my 8-weight fly rod from the rack. It was late September and the cobble bar and surrounding shallows were littered with the carcasses of spawned-out salmon — reds mostly, dwarfed by a few old kings thicker and longer than a big man’s leg. They lay on their sides, poked and torn by eagles and gulls, empty eye sockets gaping skyward; the air was foul ...   Real Anglers Article Continued