Statewide variation in the total length and number of sets on traplines.

Statewide sealing data for seven of the most ...   Trapper Report Article Continued

Sharing Pictures with Fish and Game 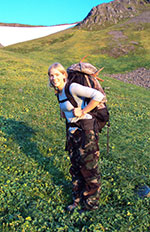 Alaskan Liz Luber harvested a caribou in 2018 and shared the photo with Fish and Game. While the image features the caribou, it highlights the fact that this was a family hunt.

Every year, hunters and anglers contribute photos to Fish and Game. The Division of Wildlife Conservation prints photos in the hunting regulations, and others are used on our website and in educational brochures and outreach materials. Pictures that convey the hunting experience are particularly welcome: hiking, ...   Sharing Pictures Article Continued

While most wolves prefer ungulates like moose, deer and mountain goats, the Gustavus pack, in northern Southeast, has displayed a preference for one unlikely marine mammal — the sea otter.

Gretchen Roffler is a wolf biologist for the Alaska Department of Fish and Game and said her work analyzing scat samples from wolves all over Southeast Alaska is what alerted her to this trend.

“We assumed moose and deer would be the primary prey species, and it’s known that in ...   Otter Eating Wolves Article Continued