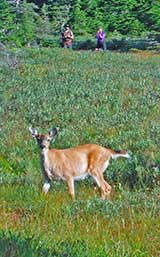 The Land Will Always Win
Hunting caribou in the Talkeetna Mountains

At five thousand feet above sea level, the vast terrain of wind-blown rock, craggy grasses and arrogant spires fell under shadow. The sun breached across the western horizon. Following its passing like a wary gang, cloud cover appeared in the east. “It might rain on us tonight,” I said to my wife as she filtered water from a clear stream exhaling from the gut of the earth. We continued to set up camp. Tent staked. Sleeping bags rolled out. Camp stove gasping under the small pot of ...   The Land Always Wins Article Continued 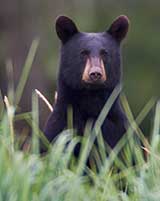 “This is a valuable resource on a whole bunch of levels,” said state wildlife biologist Charlotte Westing. “A lot of people are concerned about the resource and we want to learn ...   PWS Bears Article Continued

Alaska marine habitats are biologically rich and extremely varied, from shallow coastal waters to deep sea trenches. People depend on the resources provided by our oceans and coasts for survival and well-being. Globally, marine habitats are under threat by habitat destruction, pollution, and climate change- all driving losses in biodiversity. Some argue invasive species are an equal, if not the greater, threat to marine ecosystems.

Why should we worry about introduced species when many ...   Mapping Invasives Article Continued