Unalakleet to Bethel:
A Journey through Coastal Southwest Alaska

“You’re doing what?!?” was the reply I oftentimes heard from folks when discussing our plan to drive a 22-foot skiff hundreds of miles, from Unalakleet to Bethel. As crazy as it sounded to some people (including myself), I knew that an opportunity like this would be very difficult for me to pass up. 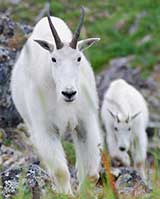 If a family of mountain goats were your neighbors, they’d be the quiet type, the kind that mostly kept to themselves. They might go away on vacation during the Fourth of July, or over the New Year, to avoid all the commotion. Fireworks, for instance, would never be their forte. That’s just the way they are — a wee bit solitary, wary of disturbances and not the overly social type.

Can My Dog Get Sick From Raw Game Meat? 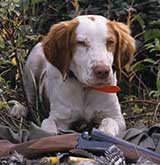 Eating raw meat from game animals can make pets sick. Dogs can get all the diseases and parasites that spread between game and their predators and scavengers like wolves and foxes.

It is important to note that it is not legal to feed game meat to pets, with the exceptions listed below. In addition, as found on page 17 of the Alaska Hunting Regulations, game meat may not be used as bait or food for pets and livestock.

However, you MAY use the following as bait or food for pets or livestock: ...   Raw Game Meat Article Continued