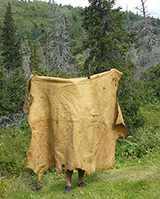 For most of human history, the skins of harvested big-game animals were not discarded by hunters. As a product of the hunt, skins were just as essential to the survival of northern hunting cultures as were an animal’s meat, fat, and organs. The hide was saved and processed into indispensable items: rawhide rope and cord, tanned skin for clothing, gloves, footwear, bags, pouches, quivers, blankets, shelter covers and much more. While it is safe to say that most bear skins are retained by ...   Tanning a Hide Article Continued

Chums on the Fly 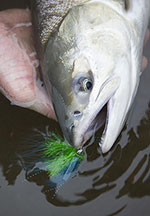 The brawny fish turned slightly against my grip, laying itself side up on the surface of the water as a faint beam of light struck the subtle figures of color running vertical across the plane of scale and fin. She didn’t come easy. These beautiful fish seldom do. I had to fight for her. Tighten the drag on my fly reel down as she bulleted through the force of a descending current.

I watched her strike. Bolt from the shadow of a mid-stream riffle, following the gaudy path of the fly ...   Chums on the Fly Article Continued

“The results of this photocensus imply that the population has continued to decline since 2013, albeit at a much reduced rate, which seems to be improving each year” said Caribou Biologist Lincoln Parrett.