Enhancing Habitat for Moose and Grouse 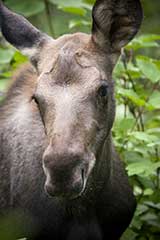 Smashing trees and burning forests may not seem like habitat enhancement. But nature rebounds in the aftermath of what might look like carnage, and that’s often good for wildlife.

Wildland fires are a natural part of the Interior Alaska ecosystem, and plants and animals have adapted to periodic fires. Willow, aspen and birch are nutritious, high-quality forage for moose. They can regenerate and thrive after certain kinds of physical trauma, such as fire or crushing. Lush sprouts emerge ...   Enhancing Habitat Article Continued

No one would be surprised to find a tent pitched by campers in the high alpine or the boreal forests or even along the rocky shorelines of Alaska, but why are there tents on the seafloor?

This summer the Alaska Department of Fish and Game (ADF&G) partnered with the Smithsonian Environmental Research Center Marine Invasions Lab (SERC) and other entities to essentially pitch tents in the subtidal waters of Whiting Harbor, near Sitka. Obviously no one was camping out down there; instead ...   Testing Biocides Article Continued

When you drive over a salmon stream do you give much thought to how fish pass underneath the road? The Fish Passage Improvement Program does! Even in a state as sparsely populated as Alaska, streams and roads cross paths many thousands of times. In the Big Lake drainage near Wasilla there are more than 100 stream crossings; Chester Creek in Anchorage crosses the road almost 30 times. Each of those crossings has the potential to delay or prevent the migration or “passage” of fish. ...   Fish Passage Article Continued

Unstable, eroding riverbanks and debris-choked streams can be unfriendly to salmon. But unfriendly habitat can be improved, and over the past 20 years, more than 700 projects have been completed with the goal of increasing salmon.

"It's turning out better than I could have hoped for," said Seaton, a biologist with the Alaska Department ...   Wood Bison Article Continued