We’d set up our blinds the evening before, Begich and I splitting up ...   Waterfowl Outlook Article Continued

End of the Road Angling
Shore fishing on the Homer Spit 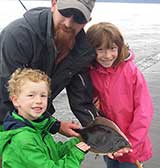 As soon as the small piece of cut herring fell beneath the undulating surf, an aggressive pull at the end of the line throttled my attention like freak thunder on a calm afternoon. I pull back. Hook set. Drag wheeling out echoes across the dark sand beach. It’s 10 a.m. and a light rain hovers; clouds shroud the southern distant mountains across Kachemak Bay, while somewhere north the sun burns a curtain of fog skipping small fitful beams across the water. The scent of diesel rides slowly ...   Homer Fishing Article Continued

This is the first human case in Alaska since 2009, although there have been cases of ...   Rabbit Fever Article Continued

Hunters in Alaska have a new tool to keep them on track. Geo-referenced PDF maps for Alaska’s Game Management Units can be downloaded to a smartphone or mobile device with GPS capabilities, and the phone’s GPS will let you know where you are, even if you are not on a wireless or cellular network.

Hunting regulations vary between different Game Management Unit, and even between subunits. In addition, land status in parts of Alaska can be confusing, a patchwork of federal, state, ...   New Hunt Maps Article Continued

Imagine a young sea lion playing with a plastic packing band floating in the ocean. The band slips over the animal’s head and lodges around its neck. Initially there isn’t a problem, but plastics are durable and outlive sea lions, so as the ...   Tangled Sea Lions Article Continued