Capturing adult sea lions is risky business for biologists and the animals and it’s rarely done. In the past, most captures involved pups or juveniles, much smaller animals that can be reasonably managed. But for several reasons there is keen interest in developing a method ...   Sea Lion Capture Article Continued

A wide-ranging, cross-country wolverine, a moose in a glacial crevasse and the bear that went in after it - researchers strive to learn what most animals in a population do most of the time, but sometimes it’s the unusual behaviors that stand out.

Bears, mountain goats, moose and wolverines in the rugged coastland north of Juneau have been the subjects of a unique multi-year study by state wildlife biologists. The core of the study area is the estuaries and river bottomlands of Berner’s ...   Berners Bay Research Article Continued

By Bob Chadwick and Matt Miller

You didn’t want it to happen and you even tried to avoid it. But there it is in front of you…a rockfish that’s probably older than your grandparents, floating on the surface with its eyes bulging and stomach protruding from its mouth. You think to yourself, “He’s a goner - game over - seagull food.” Since you’ve already reached your bag limit, you unhook the fish and let it float away. As it floats away you may feel a twinge of remorse as your bait hits ...   Releasing Rockfish Article Continued 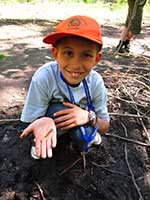 Living in the last frontier certainly provides Alaskans with opportunities to participate in some unique recreational activities. Residents can fish for king salmon from the banks of the Kenai River or haul in a halibut from the depths of Prince William Sound. Hikers can climb the rocky peaks of the Chugach Mountains or wander amongst the towering spruce trees of Tongass National Forest. Hunters pursue moose and grizzly bears throughout the Interior and stalk caribou and gray wolves ...   Outdoor Youth Days Article Continued