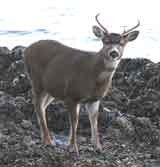 Hunters sometimes use urine-based scents to attract deer or to mask human scent. It is sold in hunting supply stores and through on-line catalogues. Most contain urine from domestic deer, often does in estrus. Deer and elk urine is possible route into Alaska for chronic wasting disease (CWD), a degenerative, fatal illness that affects deer, ...   Scent Banned Article Continued

A half-pound of bacon blistered away on the cookstove beside a pot of vile crankcase coffee. Atop the counter, a half opened box of Halibut Helper consorted with a black, clinically dead banana, an outboard motor battery, and a bag of smoke flavored pancake mix. It was 8:00 a.m., breakfast time for Old Halvorsen, and the aged galoot was trying to jumpstart his sourdough. Old Halvorsen brings fresh significance to the word "omnivore."

"Drink your coffee. It's getting ...   A Humble Fish Story Article Continued

The Alaska Department of Fish and Game and Sea Gypsy Research teamed up with Moore and Moore Films and Marni Productions to produce an 11-minute educational ...   Sea Lion Video Article Continued