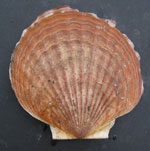 The Alaska scallop fishery is based upon the weathervane ...   Weathervane Scallop Article Continued

Grouse hunting in Alaska would be a more appealing sport were it not for its danger. Most of the year the grouse is passive, but during the mating season its ferocity can be notorious. They will most often ignore you, but if pushed or backed into a corner, caution is the watchword. No one who has studied pictures of men in a spruce forest exposed to the assault of a blue grouse flying directly at them out of the trees ever ventures with rifle or shotgun into the forest without a certain terror. ...   Hunting Hooters Article Continued

Brown bears tend to be called grizzly bears in Interior and northern Alaska, but they are all Ursus arctos. There is much to learn about their basic ...   Brown Bear Research Article Continued

A short cast behind me, David ...   The Perfect trip Article Continued