The Art of Grayling

I'd uttered my good-byes earlier that evening, not aloud, but inwardly, and without sadness. Of course, the grayling wouldn't have heard me anyway, nor would they have cared. Hardly a fly rod's length from the lakeshore, the little fish with the sail-like dorsal fins busied themselves sipping blackflies and mosquitoes off the surface. They fed even as reflections of pink tundra hills faded into darkness and the water rings they left behind sparkled with starlight.

Now an astonishing galaxy ...   The Art of Grayling ArticleContinued

The photos in Sharon Danks’ book about schoolyard habitat projects are so awe-inspiring they make me wish I were back in elementary school. Danks’ book, "Asphalt to Ecosystems: Design Ideas for Schoolyard Transformation," chronicles a growing international movement to remake schoolyards and playgrounds to better connect our children with nature. The “before” photos document drab institutional-looking schools with expanses of gray concrete, basic playground equipment ...   Outdoor learning Article Continued

Every year hundreds of technicians, biologists, and others are in the field collecting the data that fishery managers need to make informed decisions to protect and improve the state's recreational fisheries resources.

If you've gone fishing any time in the recent past you've undoubtedly reaped the benefits from the data that these researchers have collected. Sometimes the research leads to restricting or even closing a fishery to protect the fish population for future generations --- ...   Planning Research ArticleContinued 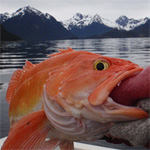 They are targeted by commercial ...   Rockfish ArticleContinued

• Reel the fish up as quickly as possible. After unhooking it, hook the release device through soft tissue on the lower jaw. Make sure the hook does not have ...   Rockfish Release ArticleContinued

I'd arrived late in the day, after a long drive followed by a hike into the hills. By the time my tent was pitched and camp organized, little time remained for hunting, maybe half an hour at most. Already dusk rose from the ground shadows, muting the light around me and gathering overhead like campfire smoke. Still, it was worth a look; moose move on windless September evenings like this one, the kind that promise a full moon and hard frost. I thought I might spot a bull, if I were very lucky, in ...   The Hunt ArticleContinued