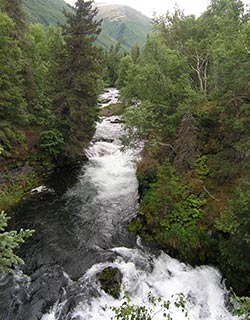 The falls tumble through a riparian canyon. ©Helen O'Harra

During late June, pools within the stairstep falls on the Russian River swarm with thousands of green-headed, red-bodied sockeye salmon. From two decks on the riverside cliffs, you can watch the salmon attempt to leap the falls to reach spawning grounds upstream. Brown and black bears sometimes appear on the river to scoop salmon from the water. The two-mile, wheelchair-accessible trail to the falls and viewing decks traverses mixed spruce-birch woods filled with forest birds. Open areas might offer a view of moose. Look for American dippers in creeks and along the river, and watch and listen for spruce grouse along the trail. On clear July evenings, Bohemian waxwings can be seen flycatching along the river below Lower Russian Lake.

The falls tumble through a riparian canyon with a dense underbrush of alder, ferns and devil’s club. Mixed white spruce forest interspersed with open areas can be seen along the lower trail. Further up the trail lie Lower and Upper Russian Lakes, and alpine areas.

In June and July, harlequin ducks nest near the turbulent waters around the falls, and there is often a brood or two near the junction of the winter trail and the Russian River. The ducklings are quite photogenic as they frolic boldly in the spray.

Bears have the right of way on trails and streams. Due to careless behavior of some humans, many bears at Russian River associate people with food, making them particularly bold. Review and follow the principles of staying safe in bear country on page 92, and encourage others to do the same. Hike the trail only in daylight and in a group. Stay on the trail.

The Russian Lakes Trail begins off the access road to the Russian River Campground, at milepost 52 of the Sterling Highway. Hike two miles to the falls and overlook.