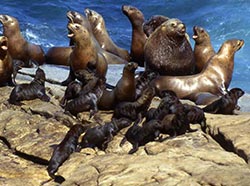 Steller Sea Lions haul out on rocks to raise their pups.

The outer reach of Resurrection Bay encloses a rich marine ecosystem with rugged coves, bays and islands. The relatively protected waters and shoreside state parklands attract a broad selection of North Pacific marine wildlife. Back-floating sea otters and the round heads of harbor seals can appear almost anywhere. Steller sea lions and harbor seals haul out on rocks in several locations, including Mary’s Bay, Rugged Island and near Cape Resurrection. Watch for humpback whales and pods of fish-eating resident killer whales. On rare occasions, the more secretive marine-mammal-eating transient killer whales visit. Common murres and puffins float on the swells and perch in cliff nests. Scan for pairs of pigeon guillemots on the waves. Kittiwakes and gulls wing over head. Mountain goats sometimes visit headland cliffs just above the sea.

This region contains deep fjords, shallow coves, estuaries and beaches. The hillsides and slopes are covered with the tangled understory and towering Sitka spruce of the coastal temperate rainforest.

Dress in warm layers, including rain gear (which also breaks the wind). If you are cruising and prone to motion sickness, you may wish to take precautions.

Most people explore Resurrection Bay with a half day boat tour or as part of a longer Kenai Fjords cruise. Book tours at the Seward Small Boat Harbor or in advance.

For the adventurous, you can take guided sea kayaking tours or go on your own. You can also arrange for a water taxi to ferry you to a Resurrection Bay campsite or one of the public cabins at Thumb Cove State Marine Park. For information and cabin bookings visit http://dnr.alaska.gov/parks.