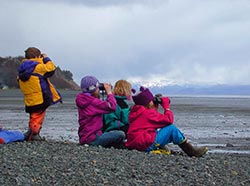 The density and variety of birds that feast on invertebrates and fish at Mud Bay in early May inspires the annual Kachemak Bay Shorebird Festival. More than 100 species of birds have been seen in Kachemak Bay during the April-May migration, many at Mud Bay itself. But good wildlife viewing is not limited to spring migration. Flocks of seabirds and shorebirds spend the winter seeking food along Mud Bay and the spit’s shoreline. Watch for gray-crowned rosy finches in winter, foraging among the stacks of stored crab pots. Rafts of ducks drift along shore at high tide, and rock sandpipers forage as the tide drops. Marine mammals, including harbor seals, sea lions and sea otters, can occasionally be seen offshore.

An ancient glacial moraine shaped by currents and reinforced by people, the Homer Spit offers miles of sand, mud, and gravel beaches. Twice a day, the bay’s tides expose hundreds of acres of flats.

Visit during late April or early May for the peak of the shorebird migration. High tide concentrates birds near shore and they forage most intensely as it begins to ebb.

Dress for wind. Parking can get congested at the Mud Bay viewing platform, so be prepared to walk from other locations. Be aware of the incoming tide.

Follow the Sterling Highway south through Homer to the beginning of the spit. Parking for the Mud Bay viewing platform and Homer Spit Trail is off Kachemak Drive. There are other pullouts along the Spit road.