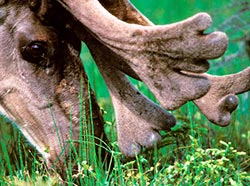 Caribou were recently reintroduced to the Kenai Peninsula.

Once extinct on the Kenai Peninsula, caribou were reintroduced in the 1960s and 1980s in five areas. The Kenai Lowlands Herd that frequents the Marathon Road and Kenai Flats areas in spring and summer originated from 21 animals released near Sterling in 1966. By 2005, the herd numbered about 135 animals and had not been hunted in more than a decade. In spring, the animals move from the Moose River-Skilak Lake area down the Kenai River valley. Although most groups number between 10 and 15 caribou, gatherings of more than 100 have been seen in the tundra off Marathon Road in June. Moose are also common in this area, and large flocks of sandhill cranes forage on the tundra in spring, with a few birds remaining to nest.

Marathon Road leads to industrial sites in what became Alaska’s first modern oil field. The Kenai airport borders the site to the west.

Marathon Road leads to industrial sites in what became Alaska’s first modern oil field. The Kenai airport borders the site to the west.

Take binoculars or a spotting scope. Respect private lands. Watch for industrial traffic from the oil field. This area can be buggy.

Take the Kenai Spur Highway to Kenai and turn north on Marathon Road, which is the first road to the east of Airport Way, next to a car dealer.