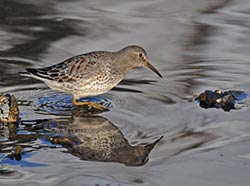 The beach road emerges from the forest at a river-mouth lined by dunes, tidally influenced beach, a meandering estuary and broad salt marsh. The woods to the north and south offer a chance to view bald eagles and moose. During migration, thousands of birds of diverse species can be seen on the wetlands and beach dunes, moving with the ebb and flow of tides. In the winter look for rock sandpipers foraging along the tide line on the beach. Thousands spend the winter here—one of only two places to view them on the Kenai Peninsula. Sockeye salmon return to spawn in June and July; millions of smolts migrate out to sea in spring. Harbor seals occasionally chase salmon into the river mouth. Beluga whales, once common here, are rarely seen due to a population decline.

Several distinct habitats occur within a few hundred yards of the river mouth; some change dra-matically with each 10 to 15-foot tide. An extensive salt marsh of sedges and dwarf shrubs sprawls along the river, interspersed with little ponds. The brackish estuary mixes the outflowing glacial water from Tustumena Lake with Cook Inlet’s tides, concentrating both marine and freshwater species. Dense lowland forest rims the open areas.

The mouth of the Kasilof River was once used by Dena’ina Natives to gather and dry salmon. Canneries and packing plants were built in the early 20th century and several still operate nearby. A winter watchman’s house, built in 1891 and sheathed in tin cans, still stands along the road.

The smolt migration of May-June intensifies activity by migratory birds. This site has proven to be one of the best spots for rare shorebird sightings in recent years. Look here in the fall for sharp-tailed and stilt sandpipers. Avoid the site during the peak of the June-July salmon season unless you want to share the beach with hundreds of fishermen. Parking for large vehicles may be tight during fishing season.