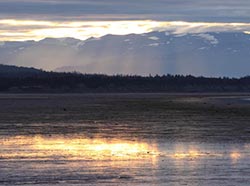 Alaska’s first state park, located on the south side of Kachemak Bay, showcases a vast range of species, from ocean animals to mountain dwellers. In the Bay, marine mammals such as sea otters, humpback whales and harbor seals forage amid common murres, horned puffins and tufted puffins. Pigeon guillemots nest along the rocky shores, and fjords host flocks of sea ducks in winter. Along the shore, ebbing tides expose the colorful world of sea stars, anemones, crabs and clams. Bald eagles and merlins patrol from perches amid towering spruce. The dense understory of devil’s club, willow and alder supports a symphony of sparrows, warblers, thrushes and other songbirds. Moose, black bears, coyotes and wolves pad along the trails, leaving their prints pressed into the mud. Mountain goats wander the alpine zone.

This park is packed with different habitats. Deep marine waters give way to tidal lagoons. The 25-foot tidal range bathes a succession of distinct intertidal zones. The beaches are fronted with a forest of towering Lutz spruce, a hybrid of white and Sitka varieties. Uplands transition from temperate rainforest to muskegs and subalpine meadows to tundra. Receding glaciers trigger plant succession in mountain valleys. Lakes support their own ecosystems.

Native people have been living in Kachemak Bay for thousands of years, and it was one of the first areas of Alaska to be settled by Europeans.

Walk a beach at low tide. Hike up into the rainforest when the tide rises.

Extend your stay by reserving one of the public use cabins or yurts in the park. For more information visit http://dnr.alaska.gov/parks/cabins/kenai.htm. These cabins are popular so plan well ahead and allow yourself at least two nights so you can settle in. There are also lodges, bed and breakfasts, and a restaurant in the small community of Halibut Cove. At times bugs are plentiful; a mosquito headnet and/or repellent will make it comfortable to slow down, watch and listen.

Halibut Cove Lagoon East cabin and latrine are along a boardwalk with a maximum gradient of 5%. Assistance may be needed on the ramp from the dock to the cabin boardwalk system. At low tide, the ramp is very steep.

Commercial water taxis and tours operate daily from the Homer Small Boat Harbor to the State Park’s Halibut Cove Lagoon public dock. Boats can be chartered to one of the many Park trails or cabins; advance reservations are recommended but not always necessary. Visit Kachemak Bay State Park and State Wilderness Park for more information.