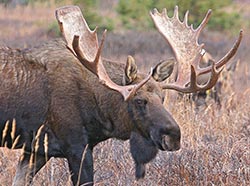 Bull moose antlers can stretch to 5 feet across.

The brushy, water-saturated flats form a network of channels and pools that draw dozens of bird species. Terns, gulls and swans nest throughout the area. Geese and ducks visit during fall and spring migrations. Most years, trumpeter swans raise young in the pond on the southeast side of the Seward Highway as it approaches Ingram Creek. A small colony of cliff swallows builds gourd-shaped mud nests under the bridge that spans the creek. Moose browse the flats, especially in winter. Pink salmon spawn in the creek beginning in August. Watch for bear tracks in the mud downstream from the bridge.

Multiple habitats occur at the head of Turnagain Arm. Salt marsh rims the mud flats, but quickly merges with alders and other brush at higher elevations. Freshwater wetlands extend southeast of the highway. Lower Ingram Creek is an intertidal spawning site for pink salmon. The mountain slope immediately beyond the creek supports a patch of temperate rainforest with hybrid Lutz spruce towering over a dim, mossy understory.

In 1964, an enormous earthquake (approximately 9.2 on the Richter Scale) rocked southcentral Alaska. When it hit upper Turnagain Arm, the land dropped more than four feet, radically changing some habitats. Evidence of this shake-up can be seen in the many large dead trees still standing on the flats near the highway. These trees were killed when saltwater flooded their once-dry roots.

Take a walk along the creek after the tide has ebbed. In late summer you’ll find swallows swooping from the bridge and pink salmon finning in the riffles. The exposed mud will be printed with animal tracks.

Seward Highway near milepost 75. Large pullouts for Ingram Creek are on both sides of the highway on the north (Anchorage) side of the bridge.