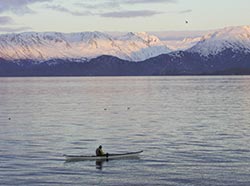 A kayaker in the waters off Homer Spit.

Homer Spit extends almost five miles into the marine world of Kachemak Bay, offering extensive viewing of seabirds, mammals and other off-shore critters from the security of land. Breakwaters and harbor structures attract black-legged kittiwakes: their small, cup-shaped nests are easily observed. Four or five species of gulls mingle, offering a challenge to sort them out on the wing. Common murres, red-necked grebes and surfbirds ride the swells at the entrance to the small boat harbor and the ferry terminal. Loons, sandpipers, sea ducks and bald eagles overwinter here. Look for Steller’s and common eiders on the west side of the spit in the winter. Watch for harbor seals and sea otters cruising just offshore, especially during spring and summer. Steller sea lions also visit, and may be seen close to shore in January and February. A walk around the beach in front of the nearby hotel with binoculars and spotting scopes is a great way to scan miles of ocean for off-shore visitors.

The end of the spit is a transition point between sea and shore, human and marine systems. Harbor breakwaters, rock jetties and navigation lights offer perches and nesting sites. Shallow water attracts fish and birds—and deeper, off-shore areas are always in sight.

The Homer Spit is part of an ancient terminal moraine—a ridge of boulders, gravel, and sand deposited at the face of a glacier that filled Kachemak Bay some 15,000 years ago.

Park by the state ferry terminal and scan the entrance to the harbor. Walk the beach and boardwalks (park at the Seafarers’ Memorial or the harbor). Bring binoculars or a spotting scope to observe off-shore activity.

The end of the spit can be congested with visitors June through August: expect to drive slowly. Keep away from Steller sea lions—they are protected by federal law, their populations are declining in this region and they can be dangerous.

Take the Sterling Highway through Homer and follow the signs. The highway ends on the spit.