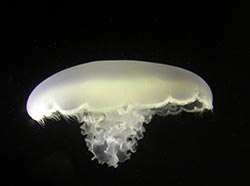 Look for jellyfish under the harbor floats.

The Homer Small Boat Harbor attracts human-tolerant birds and wildlife. Several species of gulls perch on floats, docks, and even boats, watching for discarded scraps of fish. Northwestern crows and bald eagles watch from light poles, dock supports, boats and buildings. Black-legged kittiwakes and terns may wing back and forth overhead on their way to or from nest sites. Harbor seals sometimes periscope from the channels, and Steller sea lions haul out in winter on some of the jetties. Watch for marine life in the bay’s deeper waters from the outside breakwaters and docks.

The harbor is essentially a shallow marine lagoon with steep beaches and rock faces. Nesting and perching habitat for birds can be found on jetties and breakwaters, while the harbor channels provide rearing zones for juvenile fish. An intriguing element of the habitat is the noisy presence of humans and their equipment. This favors human-tolerant species while driving off more cautious animals.

During summer, the busy harbor offers interesting views of boats, ships and marine commerce. It is an important center for Kachemak Bay marine recreation, with water taxis and private boats departing constantly for the bay’s many beaches and coves.

The harbor pilings and floats support a colorful “garden” of attached marine life. To get a look at this fascinating world, do some “belly button biology”—lie down to peer at the undersides of the floats! You may see jellyfish and small schooling fish as well.

Don’t approach Steller sea lions at any time; it violates federal law to do so, and the animals can be dangerous. Expect traffic congestion during summer.

Take the Sterling Highway through Homer and follow the signs. The boat harbor is beside the highway near the end of the Spit.